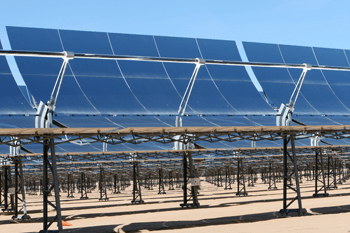 LOS ANGELES - While temperatures hit record highs across much of the West in recent weeks and California was forced to curb electricity service, the power stayed on in New Mexico thanks to proactive energy efficiency and conservation measures.

Public Service Company of New Mexico on Aug. 19 did ask customers to cut back on power use during the peak demand time until 9 p.m., to offset energy supply issues due to the record-breaking heatwave that was one of the most severe to hit the West since 2006. But the Albuquerque Journal's Aug. 28 editorial, "PRC should see the light with record heat and blackouts," confuses the problem with the solution. Record temperatures fueled by climate change – not renewable energy – were to blame for the power challenges last month. And thanks to the Energy Transition Act, New Mexico is reducing climate change-causing pollution and better positioned to prevent the worst impacts of global warming.

During those August days, more than 80 million U.S. residents were under excessive heat warnings. As the Journal's editorial pointed out, California experienced blackouts on Aug. 14 and 15 as wildfires swept across the state and temperatures rose. In fact, a recent report by the University of Chicago's Climate Impact Lab found the world has experienced record heat this summer due to climate change, and heat-related deaths will continue to rise in the future.

As the recent California energy incidents show, climate change is a threat to a reliable electricity system and our health as soaring temperatures and heatwaves strain our grid. Demand for electricity rises as people depend more on energy-intensive air conditioning. High temperatures also can decrease transmission line efficiency and cause power plant operators to scale back or even temporarily stop electricity generation.

Lobbyists for the fossil fuel industry may claim that the service interruptions and the conservation requests in New Mexico demonstrate the need for keeping fossil-fueled power generation for electricity reliability. But fossil fuel combustion still is subject to the factors that cause blackouts – while also driving climate change and making resulting heatwaves more common. After an investigation, California's own energy agencies found no substance to the claim that renewable energy use was a factor in the situation there, and it's not to blame in New Mexico, either.

New Mexico's Energy Transition Act is a bold, necessary step to limit the damage caused by climate change in the future. It creates a reasonable, cost-saving path to eliminating greenhouse gas emissions associated with generating electricity.

The New Mexico Public Regulation Commission properly applied this law when it recently voted unanimously to replace PNM's coal-fired generation at San Juan Generating Station with carbon-free solar energy and battery storage located in the Four Corners communities. The development will create jobs and provide resources for the local school district and help ensure a stronger economy and a healthier future for the region.

As we expand solar and wind energy here in New Mexico, we can help ensure reliable electricity service by building out greater battery storage for renewable energy resources. Expanding regional energy markets that can dispatch the lowest-cost energy from across the region to places where it is needed most would make renewable energy more available and reduce costs.

Energy efficiency and demand response are important when we are facing extraordinary conditions, so it is unfortunate that the Albuquerque Journal made the unsubstantiated claim that a stray cloud will put out the lights. It was hot, supplies were tight on the electric grid, and in those moments, we should conserve. We should not use those moments to turn our back on progress.