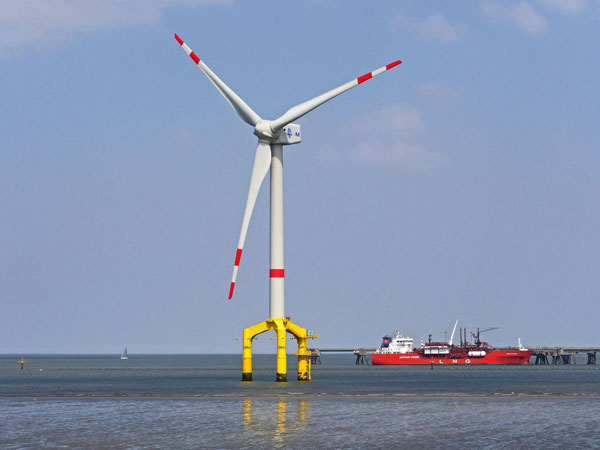 Under the plan, wind turbines would be raised off the coasts of Belgium, the Netherlands, Germany and Denmark, daily Danish newspaper Jyllands-Posten said.

The project would mean a tenfold increase in the EU's current offshore wind capacity.

“The North Sea can do a lot," Danish Prime Minister Frederiksen told the newspaper, adding the close cooperation between the four EU nations "must start now.”

In Brussels, the European Commission moved Wednesday to jump-start plans for the whole 27-nation EU to abandon Russian energy amid the Kremlin’s war in Ukraine. The commission proposed a nearly 300 billion-euro ($315 billion) package that includes more efficient use of fuels and a faster rollout of renewable power.

The investment initiative by the EU's executive arm is meant to help the bloc start weaning themselves off Russian fossil fuels this year. The goal is to deprive Russia, the EU’s main supplier of oil, natural gas and coal, of tens of billions in revenue and strengthen EU climate policies.

“We are taking our ambition to yet another level to make sure that we become independent from Russian fossil fuels as quickly as possible,” von der Leyen said in Brussels when announcing the package, dubbed REPowerEU.

The European Commission has set an overall target of generating 300 gigawatts of offshore energy of by 2050.

Along with climate change, the war in Ukraine has made EU nations eager to reduce their dependency on Russian natural gas and oil. In 2021, the EU imported roughly 40% of its gas and 25% of its oil from Russia.

At a March 11 summit, EU leaders agreed in principle to phase out Russian gas, oil and coal imports by 2027.