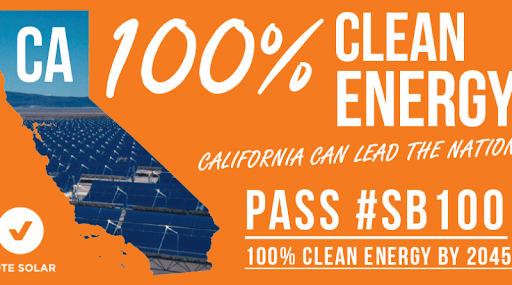 SAN DIEGO - Amid a spate of wildfires that have covered large portions of California with unhealthy air, an environmental group that frequently lobbies the Legislature in Sacramento is calling on the state to accelerate by 15 years California's commitment to derive 100 percent of its electricity from carbon-free sources.

But skeptics point to last month's pair of rolling blackouts and say moving up the mandate would be too risky.

"Once again, California is experiencing some of the worst that climate change has to offer, whether it's horrendous air quality, whether it's wildfires, whether it's scorching heat," said Dan Jacobson, state director of Environment California. "This should not be the new normal and we shouldn't allow this to become normal."

Signed by then-Gov. Jerry Brown in 2018, Senate Bill 100 commits California by 2045 to use only sources of energy that produce no greenhouse gas emissions to power the electric grid.

Implemented through the state's Renewable Portfolio Standard, SB 100 mandates 60 percent of the state's power will come from renewable sources such as solar and wind within the next 10 years. By 2045, the remaining 40 percent can come from other zero-carbon sources, such as large hydroelectric dams.

The topics include scenarios in which SB 100's requirements can be accelerated. Following an Energy Commission workshop earlier this month, Environment California sent a six-page note to all three agencies urging a 100 percent clean energy standard by 2030.

The group pointed to comments by Gov. Gavin Newsom after he toured the devastation in Butte County caused by the North Complex fire.

"Across the entire spectrum, our (state) goals are inadequate to the reality we are experiencing," Newsom said Sept. 11 at the Oroville State Recreation Area.

Newsom "wants to look at his climate policies and see what he can accelerate," Jacobson said. "And we want to encourage him to take a look at going to 100 percent by 2030."

Jacobson said Newsom cam change the policy by issuing an executive order but "it would probably take some legislative action" to codify it.

However, Assemblyman Jim Cooper, a Democrat from the Sacramento suburb of Elk Grove, is not on board.

"I think someday we're going to be there but we can't move to all renewable sources right now," Cooper said. "It doesn't work. We've got all these burned-out areas that depend upon electricity. How is that working out? They don't have it."

In mid-August, California experienced statewide rolling blackouts for the first time since 2001.

The California Independent System Operator _ which manages the electric grid for about 80 percent of the state _ ordered utilities to ratchet back power, fearing the grid did not have enough supply to match a surge in demand as people cranked up their air conditioners during a stubborn heat wave that lingered over the West.

The grid operator, known as the CAISO for short, avoided two additional days of blackouts in August and two more in September thanks to household utility customers and large energy users scaling back demand.

CAISO Chief Executive Officer Steve Berberich said the outages were not due to renewable energy sources in California's power mix. "This was a matter of running out of capacity to serve load" across all hours, Berberich told the Los Angeles Times.

California has plenty of renewable resources _ especially solar power _ during the day. The challenge comes when solar production rapidly declines as the sun goes down, especially between 7 p.m. and 8 p.m. in what grid operators call the "net load peak."

The loss of those megawatts of generation has to be replaced by other sources. And in an electric grid, system operators have to balance supply and demand instantaneously, generating every kilowatt that is demanded by customers who expect their lighting/heating/air conditioning to come on the moment they flip a switch.

Two weeks after the rotating outages, the State Water Resources Control Board voted to extend the lives of four natural gas plants in the Los Angeles area. Natural gas accounts for the largest single source of California's power mix _ 34.23 percent. But natural gas is a fossil fuel, not a carbon-free resource.

Jacobson said moving the mandate to 2030 can be achieved by more rapid deployment of renewable sources.

The Public Utilities Commission has already directed power companies to ramp up capacity for energy storage, such as lithium-ion batteries that can be used when solar production falls off.

Long-term storage is another option. That includes pumped hydro projects in which hydroelectric facilities pump water from one reservoir up to another and then release it. The ensuing rush of water generates electricity when the grid needs it.

Environment California also pointed to offshore wind projects along the coast of Central and Northern California that it estimates could generate as much as 3 gigawatts of power by 2030 and 10 gigawatts by 2040. Offshore wind supporters say its potential is much greater than land-based wind farms because ocean breezes are stronger and steadier.

Gary Ackerman, a utilities and energy consultant with more than four decades of experience in power issues affecting states in the West, said the 2045 mandate was "an unwise policy to begin with" and to accommodate a "swift transition (to 2030), you're going to put the entire grid and everybody in it at risk."

But Ackerman's larger concern is whether enough transmission lines can be constructed in California to bring the electricity where it needs to go.

"I believe Californians consider transmission lines in their backyard about the same way they think about low-income housing _ it's great to have, but not in my backyard," Ackerman said. "The state is not prepared to build the infrastructure that will allow this grandiose build-out."

Cooper said he worries about how much it will cost the average utility customer, especially low and middle-income households. The average retail price for electricity in California is 16.58 cents per kilowatt-hour, compared to 10.53 nationally, according to the U.S. Energy Information Administration.

"What's sad is, we've had 110-degree days and there are people up here in the Central Valley that never turned their air conditioners on because they can't afford that bill," Cooper said.

Jacobson said the utilities commission can intervene if costs get too high. He also pointed to a recent study from the Goldman School of Public Policy at UC Berkeley that predicted the U.S. can deliver 90 percent clean, carbon-free electric grid by 2035 that is reliable and at no extra cost in consumers' bills.

"Every time we wait and say, 'Oh, what about the cost? Is it going to be too expensive?' we're just making the cost unbearable for our kids and grandkids," Jacobson said. "They're the ones who are going to pay the billions of dollars for all the remediation that has to happen ... What's it going to cost if we do nothing, or don't go fast enough?"

The joint agency report on SB 100 from the Energy Commission, the Public Utilities Commission and the Air Resources Board is due at the beginning of next year.