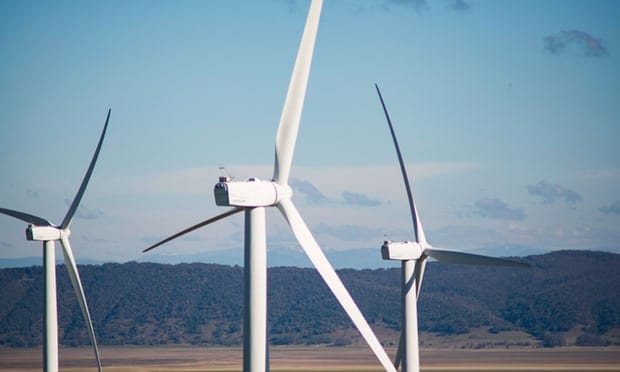 LONDON - The more ambitious a clean energy target is, the lower Australian wholesale electricity prices will be, according to new modelling by energy analysis firm RepuTex.

The Finkel review, released last month recommended the government introduce a clean energy target (CET), which it found would cut emissions from the national electricity market and put downward pressure on both wholesale and retail prices.

The Finkel review only modelled a CET that would cut emissions from the electricity sector by 28% below 2005 levels by 2030. But all available analysis has demonstrated that such a cut would not be enough to meet Australia’s overall emissions reductions made as part of the Paris agreement, which themselves were too weak to help meet the central aim of that agreement – to keep global warming to “well below 2C”.

In the “business as usual scenario”, RepuTex found wholesale prices would hover roughly around the current price of $100 per MWh.

The more ambitious CET had a broadly similar effect on wholesale prices. But RepuTex found it would drive prices down a little slower, but then keep them down for longer, stabilising at about $40 to $50 for most of the 2020s.

It found a CET would drive prices down by incentivising more generation into the market. The more ambitious CET would further suppress prices by introducing more renewable energy, resulting in expensive gas generators less often being able to set the price of electricity in the wholesale market.

The downward pressure of a CET on wholesale prices was more dramatic in the RepuTex report than in Finkel’s own modelling. But that was largely because, as Alan Finkel himself acknowledged, the estimates of the costs of renewable energy in the Finkel review modelling were conservative.

Speaking at the National Press Club, Finkel said: “We were conservative in our estimates of wind and large-scale solar generator prices. Indeed, in recent months the prices for wind generation have already come in lower than what we modelled.”

The RepuTex modelling also found the economics of the national electricity market no longer supported traditional baseload generation – such as coal power plants that were unable to respond flexibly to demand – and so they would not be built without the government distorting the market.

“With a premium placed on flexible generation that can ramp up or down, baseload only generation – irrespective of how clean or dirty it is – is likely to be too inflexible to compete in Australia’s future electricity system,” the report said.

“In this context, renewable energy remains attractive to the market given it is able to deliver energy reliability, with no emissions, at low cost prices. This affirms that renewables are a lay down misere to out-compete traditionally fossil-fuel sources in Australia for the foreseeable future.”