IEEE 1584 - 2018 is titled “IEEE Guide for Performing Arc Flash Hazard Calculations” and provides a methodology for calculating prospective arc flash hazards. The 2018 version is an update to the original standard that was first issued in 2002. Based on test data, the committee developed empirical equations to calculate arc flash incident energy for three-phase AC systems. While both the 2002 and 2018 methods are empirical, the equations in the 2018 version are vastly more complex. For more detail, please refer the standard. This complexity is due, in part, to the huge increase in test results used. For the 2002 previous version, data from approximately 300 tests were used. For the current 2018 version, over 1,800 tests were considered.

Validity of IEEE 1584 Model - Range of Test Data
It is important to understand that the equations are valid only within the ranges for which test data were evaluated. Some changes were made to the applicable limits were made in the 2018 version. Table 3.1 summarizes the limits for the 2018 and 2002 versions.

Applications Outside of IEEE 1584-2018 Test Range
Attempting to use the IEEE 1584-2018 equations for conditions outside of the stated test ranges in Table 3.1 is generally NOT RECOMMENDED. Because of the empirical nature of the equations, applying them outside the intended range can yield nonconservative or even nonsensical results. 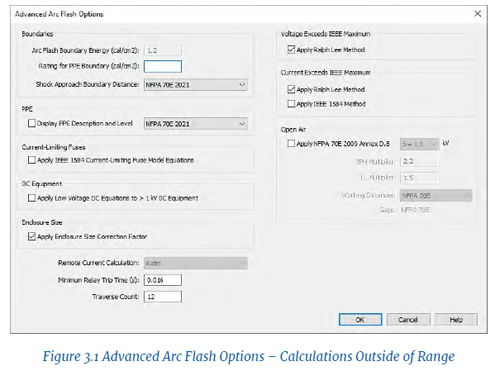 Arc Flash Hazard Below 250 V
It is generally accepted that arcs are more difficult to sustain at voltages below 250 V. In the 2002 version of IEEE-1584, there is a statement that below 240 V, arc flash did not need to be considered if the source transformer size was less than 125 kVA. However only limited testing was done at these lower voltages for the ieee 1584-2002 edition.

As more testing was done it was determined that under certain conditions, arcs could be sustained at voltages below 250 V. Based on this new test data, IEEE 1584-2018 adopted a new criteria in Section 4.3 that states “Sustainable arcs are possible but less likely in three-phase systems operating at 240 V nominal or less with an available short-circuit current less than 2000 A.” This means that arc flash hazards for nearly all 208 V and 240 V systems should be calculated using the IEEE 1584-2018 equations. Only systems served by very small transformers will have arcing fault currents below 2000 A.

The standard considers a number of factors when performing its calculations: