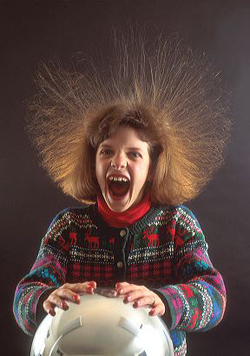 Electricity is often described as being either static or dynamic. The difference between the two is based simply on whether the electrons are at rest (static) or in motion (dynamic). Static electricity is a build up of an electrical charge on the surface of an object. It is considered “static” due to the fact that there is no current flowing as in AC or DC electricity. Static electricity, which fascinated Benjamin Franklin (hence his experiments with a lightning bolt), is usually caused when there is a buildup of static charges on non-conductive materials rub such as rubber soles, plastic or glass are rubbed together (or when you rub a balloon), causing a transfer of electrons, which then results in an imbalance of charges between the two materials which are brought close. Anti static substances eliminate this. The fact that there is an imbalance of positive and negative charges between the two materials means that the objects will exhibit an attractive or repulsive force. This led to the development of the van de graaff generator which was used in many triboelectric series static electricity experiments.

One of the most fundamental laws of static electricity, as well as magnetics, deals with attraction and repulsion. Like charges repel each other and unlike charges attract each other. This results in static shock from a charge imbalance because of extra electrons. All electrons in an electric current possess a negative induced charge separation and as such will repel each other. Similarly, all protons possess a positive charge and as such will repel each other. Electrons (negative) and protons (positive) are opposite in their charge and will attract each other. For example, if two pith balls are suspended, as shown in Figure 10-5, and each ball is touched with the charged glass rod, some of the charge from the rod is transferred to the balls. The balls now have similar charges and, consequently, repel each other as shown in part B of Figure 10-5. 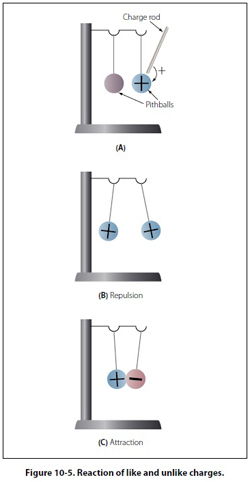 If a plastic rod is rubbed with fur, it becomes negatively charged and the fur is positively charged. By touching each ball with these differently charged sources, the balls obtain opposite charges and attract each other as shown in part C of Figure 10-5. This results in static electricity. Although most objects become charged with static electricity by means of friction, a charged substance can also influence objects near it by contact. This is illustrated in Figure 10-6.

A field of force exists around a charged body. This field is an electrostatic field (sometimes called a dielectric field) and is represented by lines extending in all directions from the charged body and terminating where there is an equal and opposite charge. To explain the action of an electrostatic field, lines are used to represent the direction and intensity of the electric field of force. As illustrated in Figure 10-8, the intensity of the field is indicated by the number of lines per unit area, and the direction is shown by arrowheads on the lines pointing in the direction in which a small test charge would move or tend to move if acted upon by the field of force. 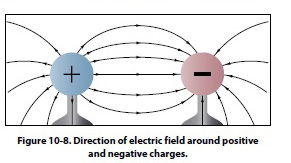 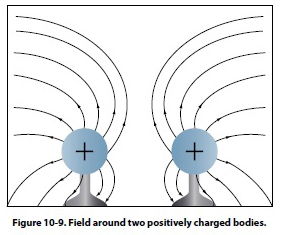 Positive charges are shown, but regardless of the type of charge, the lines of force would repel each other if the charges were alike. The lines terminate on material objects and always extend from a positive charge to a negative charge. These lines are imaginary lines used to show the direction a real force takes. It is important to know how a charge is distributed on an object. Figure 10-10 shows a small metal disk on which a concentrated negative charge has been placed. 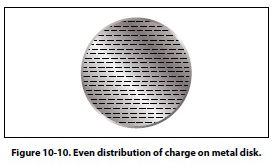 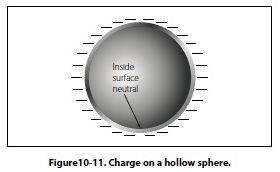 Although the sphere is made of conducting material, the charge is evenly distributed over the outside surface. The inner surface is completely neutral. This phenomenon is used to safeguard operating personnel of the large Van de Graaff static generators used for atom smashing. The safest area for the operators is inside the large sphere, where millions of volts are being generated. The distribution of the charge on an irregularly shaped object differs from that on a regularly shaped object. Figure 10-12 shows that the charge on such objects is not evenly distributed. The greatest charge is at the points, or areas of sharpest curvature, of the objects. 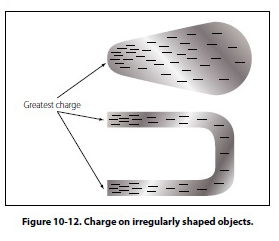