As Trump ditches Paris, California is one step closer to getting wind power from Wyoming 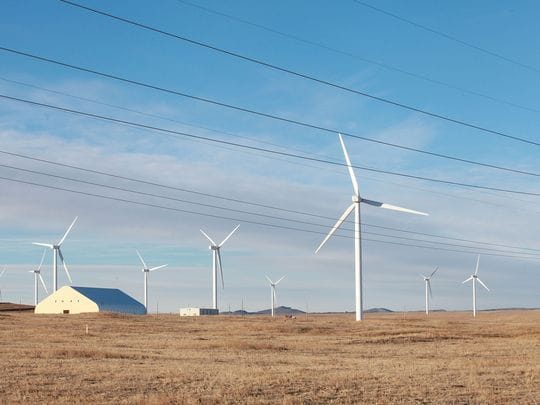 Federal officials have approved another section of the 730-mile TransWest Express power line, which would carry energy from Philip Anschutz's Chokecherry and Sierra Madre wind farm to potential customers in California, Arizona and Nevada. The 1,000-turbine, 3,000-megawatt wind project, which has been in the works for a decade, would be built in south-central Wyoming, in one of the windiest spots in the continental U.S.

Supporters say the massive power project would help California meet its clean energy goals, in part because Wyoming winds tend to blow strong into the evening, as the sun sets over the Pacific and the Golden State's many solar farms go offline. Under California law, electric utilities are required to get 50% of their power from renewable sources by 2030. The state Senate passed a bill Wednesday that would raise the clean energy mandate to 60% by 2030 and 100% by 2045.

The Denver-based Anschutz Corporation hasn't inked any contracts to sell the electricity its Wyoming wind farm would generate. But company officials are confident demand will materialize by the time they're ready to build turbines. Construction of roads and other project infrastructure started last year and picked back up in April after a winter hiatus.

The developer has already spent $100 million developing the wind farm and power line, and expects to spend a combined $8 billion on the two projects.

Bill Miller oversees the development of the Anschutz Corporation's Chokecherry and Sierra Madre wind farm in Wyoming, which would send as much as 3,000 megawatts of wind power to California. (Photo: Jay Calderon/The Desert Sun)

After an extensive environmental review, the U.S. Forest Service issued a permit Wednesday for portions of the TransWest Express transmission line that would cross through 19 miles of the Uinta-Wasatch-Cache and Manti-La Sal national forests in Utah.

"It's another step forward in the process of making this line a reality, and being able to provide a path that allows California, Arizona and Nevada to access the high volumes of renewable energy supplies that are available in Wyoming," said Kara Choquette, a spokesperson for the Anschutz subsidiaries developing the power project.

Between the Forest Service approval and a Bureau of Land Management permit issued in December, the developer now has the go-ahead to build about two-thirds of the 730-mile route, Choquette said. Company officials are reaching out to the roughly 450 private landowners along the proposed route. They must also apply for a state permit in Wyoming, and 14 county-level permits in Wyoming, Colorado, Utah and Nevada.

But Anschutz's Chokecherry and Sierra Madre wind farm is a reminder that Trump can't stop the ongoing transition from coal to cleaner sources of energy, which is being driven largely by market forces. Solar, wind and natural gas, which burns more cleanly than coal, are now the cheapest sources of new electricity across much of the country. Utility industry executives are abandoning coal and embracing renewable energy. And the American solar industry employs more people than coal or natural gas.

States and local governments in California, New York and elsewhere have also forged ahead with policies to reduce climate emissions. So have major companies like Apple, Facebook and Google, which have invested billions of dollars in renewable energy.

"The (Trump) administration is so out of step with reality right now. The trend is powerful, whether it's coming the cities or corporations, or from the coastal states," said Don Furman, a former utility executive who now advocates for greater sharing of renewable energy across state lines in the West.

Clean energy advocates say the 3,000-megawatt Wyoming wind farm is an especially powerful example of the economic case for renewable energy, because its proprietor is Anschutz, a longtime fossil fuel magnate and major donor to Republican politicians.

"I don't think Philip Anschutz would be putting his money here if he thought this was a bad business bet," Furman said.

PacifiCorp officials say the $6 billion transmission project is needed to meet growing electricity demand. They've also pitched the power lines as another opportunity to transmit wind power from Wyoming to California and other coastal states. Critics, though, see Energy Gateway as costly and unnecessary — and they're worried Californians would end up paying the price through higher electricity rates.