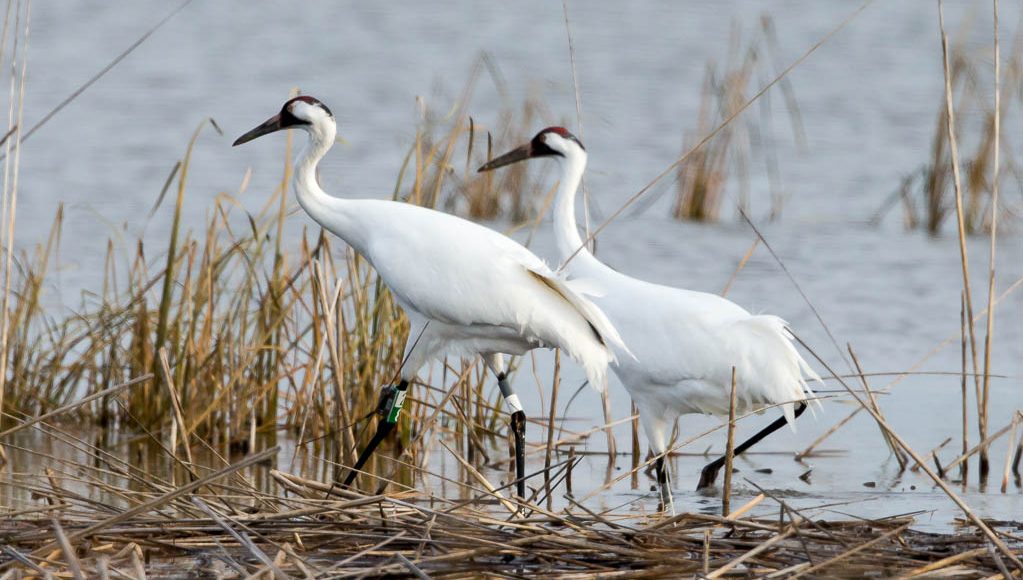 WASHINGTON - As gatherings to observe whooping cranes join the ranks of online-only events this year, a new study offers insight into how the endangered bird is faring on a landscape increasingly dotted with wind turbines. The paper, published this week in Ecological Applications, reports that whooping cranes migrating through the U.S. Great Plains avoid “rest stop” sites that are within 5 km of wind-energy infrastructure.

Avoidance of wind turbines can decrease collision mortality for birds, but can also make it more difficult and time-consuming for migrating flocks to find safe and suitable rest and refueling locations. The study’s insights into migratory behavior could improve future siting decisions as wind energy infrastructure continues to expand.

“In the past, federal agencies had thought of impacts related to wind energy primarily associated with collision risks,” said Aaron Pearse, the paper’s first author and a research wildlife biologist for the U.S. Geological Survey’s Northern Prairie Wildlife Research Center in Jamestown, N.D. “I think this research changes that paradigm to a greater focus on potential impacts to important migration habitats.”

The study tracked whooping cranes migrating across the Great Plains, a region that encompasses a mosaic of croplands, grasslands and wetlands. The region has seen a rapid proliferation of wind energy infrastructure in recent years: in 2010, there were 2,215 wind towers within the whooping crane migration corridor that the study focused on; by 2016, when the study ended, there were 7,622 wind towers within the same area.

Pearse and his colleagues found that whooping cranes migrating across the study area in 2010 and 2016 were 20 times more likely to select “rest stop” locations at least 5 km away from wind turbines than those closer to turbines.

The authors estimated that 5% of high-quality stopover habitat in the study area was affected by presence of wind towers. Siting wind infrastructure outside of whooping cranes’ migration corridor would reduce the risk of further habitat loss not only for whooping cranes, but also for millions of other birds that use the same land for breeding, migration, and wintering habitat.