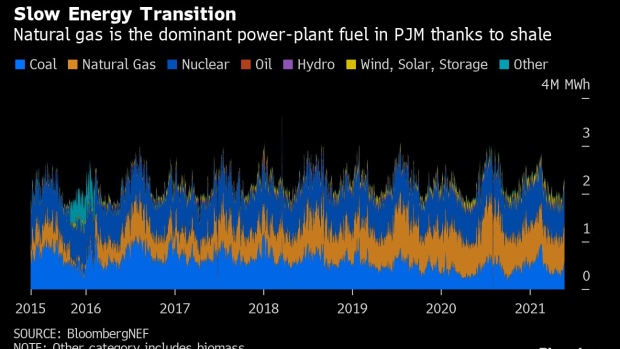 NEW YORK - Power-plant owners serving the biggest U.S. grid will be paid 64% less next year for being on standby to keep the lights on from New Jersey to Illinois.

Suppliers to PJM Interconnection LLC’s grid, which serves more than 65 million people, will get $50 a megawatt-day to provide capacity for the the year starting June 2022, according to the results of an auction released Wednesday. That’s down sharply from $140 in the previous auction, held in 2018. Analysts had expected the price would fall to about $85.

The PJM auction is the single most important event for power generators across the eastern U.S., including Calpine Corp., NRG Energy Inc. and Exelon Corp., because it dictates a big chunk of their future revenue. It also plays a pivotal role in shaping the region’s electricity mix, determining how much the region is willing to stick with coal and natural gas plants or replace them with wind and solar.

Exelon shares fell 0.4% after the results were released. Vistra fell 1.5%. NRG was unchanged.

Blackouts triggered by extreme weather in Texas and California over the last year have reignited a debate over whether other regions should institute capacity systems similar to the one used by PJM. The market, which pays generators to be on standby in case extra power is needed, has long been a source of controversy. While it makes the grid more reliable, the system drives up costs for consumers. In the area around Chicago, for instance, these charges total more than $1.7 billion per year, accounting for 20% of customer bills, according to the Illinois Clean Jobs Coalition.

In the 2018 auction, PJM contracted supplies that were about 22% in excess of the peak demand projection at the time. This year, the grid is projected to start summer with a reserve margin of about 26%, according to the market monitor -- far higher than the 16% most engineers say is needed to prevent major outages.

Fossil-Fuel Advantage
Heading into the auction, analysts expected coal and gas plants to have the advantage. Nuclear reactors and renewables, they said, were poised to struggle.

That’s because this is the first PJM auction run under pricing rules imposed by federal regulators during the Trump administration. The new structure creates a price floor for some bidders, effectively hobbling nuclear and renewables that receive state subsidies while making it easier for fossil fuels to compete.

Those rules triggered contentious wrangling between power providers, PJM and federal regulators, delaying the auction for two years. The new system, however, may be short lived. The Biden administration is moving to overhaul the rules in time for the next auction in December.

Dominion Energy Inc., one of the biggest U.S. utility owners, pulled out of the market over the rules. The Virginia-based company, which has a goal to have net-zero carbon emissions by 2050, said the new PJM format will “make renewables more expensive” than delivering clean energy through alternative markets.

Illinois, New Jersey and Maryland have also threatened to leave the capacity market unless the new price floor is eliminated. PJM has already launched a process to do it.

PJM is already one of the most fossil-fuel intensive grids, with 60% of its electricity coming from coal and gas. Power plants that bid into the auction rely on it for the bulk of their revenue. That means plants that win contracts have an incentive to continue operating for as long as they can.