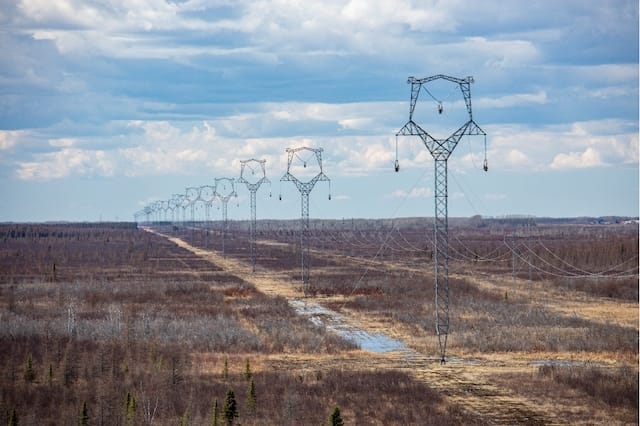 Minnesota Power completed the Great Northern Transmission Line (GNTL) in February 2020, ahead of schedule and under budget. The 224-mile line runs from the Canadian border in Roseau County to a substation near Grand Rapids, Minnesota. It consists of 800 tower structures which were fabricated in the United States and used 10,000 tons of North American steel. About 2,200 miles of wire were required to install the line's conductors. The GNTL also is contributing significant property tax revenue to local communities along the route.

"This is such an incredible achievement for Minnesota Power, ALLETE, and our region, and is the culmination of a decade-long vision brought to life by our talented and dedicated employees," said ALLETE President and CEO Bethany Owen. "The GNTL will help Minnesota Power to provide our customers with 50 percent renewable energy less than a year from now. As part of our EnergyForward strategy, it also strengthens the grid across the Midwest and in Canada, enhancing reliability for all of our customers."

With the GNTL energized and connected to Manitoba Hydro's recently completed Manitoba-Minnesota Transmission Project at the border, the companies now have a unique "wind storage" mechanism that quickly balances energy supply and demand in Minnesota and Manitoba, and enables a larger role for renewables in the North American energy grid.

The GNTL and its delivery of carbon-free hydropower are important components of Minnesota Power's EnergyForward strategy to transition away from coal and add renewable power sources while maintaining reliable and affordable service for customers. It also is part of a broader ALLETE strategy to advance and invest in critical regional transmission and distribution infrastructure to ensure grid integrity and enable cleaner energy to reduce carbon emissions.

"The seed for this renewable energy initiative was planted in 2008 when Minnesota Power proposed purchasing 250 megawatts of hydropower from Manitoba Hydro. Beyond the transmission line, it also included a creative asset swap to move wind power from North Dakota to Minnesota, innovative power purchase agreements, and a remarkable advocacy process to find an acceptable route for the GNTL," said ALLETE Executive Chairman Al Hodnik. "It marries wind and water in a unique connection that will help transform the energy landscape of North America and reduce carbon emissions related to the existential threat of climate change."

Minnesota Power and Manitoba Hydro, a provincial Crown Corporation, coordinated on the project from the beginning. It is based on the companies' shared values of integrity, environmental stewardship and community engagement.

"The completion of Minnesota Power's Great Northern Transmission Line and our Manitoba-Minnesota Transmission Project is a testament to the creativity, perseverance, cooperation and skills of hundreds of people over so many years on both sides of the border," said Jay Grewal, president and CEO of Manitoba Hydro. "Perhaps even more importantly, it is a testament to the wonderful, longstanding relationship between our two companies and two countries. It shows just how much we can accomplish when we all work together toward a common goal."

Minnesota Power engaged federal, state and local agencies; the sovereign Red Lake Nation and other tribes; and landowners along the proposed routes beginning in 2012. Through 75 voluntary meetings and other outreach forums, a preferred route was selected with strong support from stakeholders that was approved by the Minnesota Public Utilities Commission in April 2016.

A four-year state and federal regulatory process culminated in late 2016 when the federal Department of Energy approved a Presidential Permit for the GNTL, needed because of the international border crossing. Construction of the line began in early 2017.

"A robust stakeholder process is essential to the success of any project, but especially when building a project of this scope," Owen said. "We appreciated the early engagement and support from stakeholders, local communities and tribes, agencies and regulators through the many approval milestones to the completion of the GNTL."