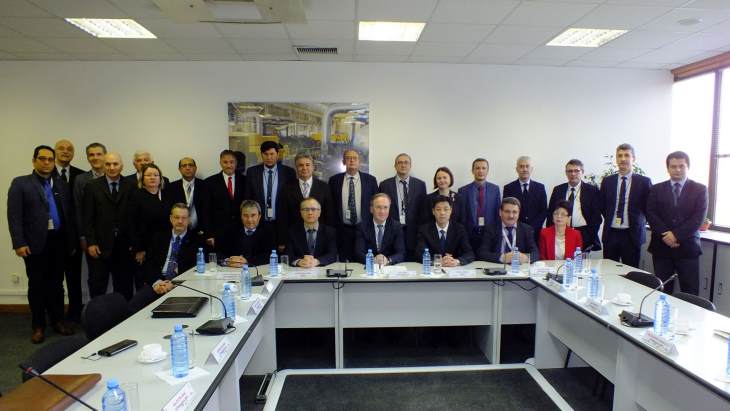 A meeting of the OSART follow-up mission to Cernavoda NPP

BUCHAREST - The International Atomic Energy Agency (IAEA) said yesterday that the operator of Romania’s Cernavoda nuclear power plant had demonstrated "strengthened operational safety" by addressing the findings of an initial IAEA review in 2016. The Operational Safety Review Team (OSART) concluded a five-day follow-up mission on 8 March to the Cernavoda plant, which is on the Danube-Black Sea Canal, about 160 km from Bucharest.

The OSART team was led by Fuming Jiang, a senior nuclear safety officer at the IAEA.

"We saw improvements in key areas, such as the procurement of important spare parts, the identification and reporting of some deficiencies, and some maintenance work practices, as evidenced by relevant performance indicators," Jiang said.

The team observed that several findings from the 2016 review had been fully addressed, including: enhanced operator crew performance during simulator training; better identification and reporting of deficiencies in the field; and improvement in maintenance work practices.

More time is required, it said, to fully implement some actions, including: further improvements in the procurement of important spare parts with relevance to safety; further enhancement in the revision and update of some operating procedures; and control and labelling of some plant chemicals.

Dan Bigu, site vice president of Cernavoda NPP, said the 2016 mission had "proven to be very beneficial", adding that the current follow-up mission would "provide further catalyst support to our journey to nuclear excellence".

The team provided a draft report of the mission to the plant's management and a final report will be submitted to the Romanian government within three months.

OSART missions aim to improve operational safety by objectively assessing safety performance using the IAEA's safety standards and proposing recommendations and suggestions for improvement where appropriate. The follow-up missions are standard components of the OSART programme and are typically conducted within two years of the initial mission.