Covid-19 is reshaping the electric rhythms of New York City 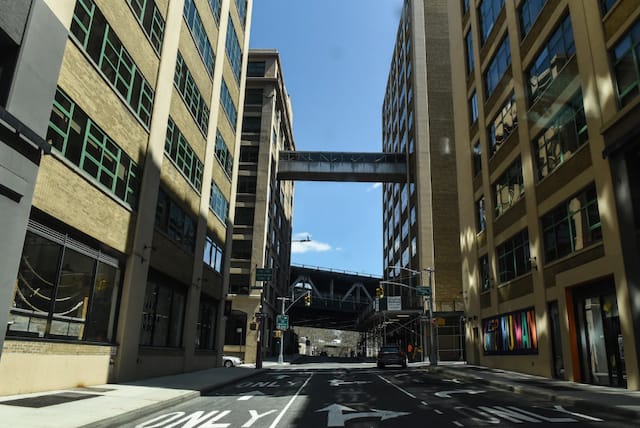 NEW YORK - At his post 150 miles up the Hudson, Jon Sawyer watches as a stay-at-home New York City stirs itself with each new dawn in this era of covid-19.

He’s a manager in the system that dispatches electricity throughout New York state, keeping homes lit and hospitals functioning, work that is so essential that he, along with 36 colleagues, has been sequestered away from home and family for going on four weeks now, to avoid the disease.

The hour between 7 a.m. and 8 a.m. once saw the city bounding to life. A sharp spike would erupt on the system’s computer screens. Not now. The disease is changing the rhythms of the city, and you can see it in the flows of electricity.

Kids are not going to school, restaurants are not making breakfast for commuters, offices are not turning on the lights, and thousands if not millions of people are staying in bed later, putting off the morning cup of coffee and a warm shower.

Electricity demand in a city that has been shut down is running 18 percent lower at this weekday morning hour than on a typical spring morning, according to the New York Independent System Operator, Sawyer’s employer. As the sun rises in the sky, usage picks up, but it’s a slower, flatter curve.

Though the picture is starkest in New York, it’s happening across the country. Daytime electricity demand is falling, even accounting for the mild spring weather, and early-morning spikes are deflating. The wholesale price of electricity is falling, too, driven by both reduced demand and the historically low cost of natural gas.

Sign up for our Coronavirus Updates newsletter to track the outbreak. All stories linked in the newsletter are free to access.

As covid-19 hits, coal companies aim to cut the tax they pay to support black-lung miners

Falling demand will hit the companies that run the “merchant generators” hardest. These are the privately owned power plants that sell electricity to the utilities and account for about 57 percent of electricity generation nationwide.

Closed businesses have resulted in falling demand. Residential usage is up — about 15 percent among customers of Con Edison, which serves New York City and Westchester County — as workers and schoolchildren stay home, but it’s spread out through the day. Home use does not compensate for locked-up restaurants, offices and factories. Or for the subway system, which on a pre-covid-19 day used as much electricity as Buffalo.

Hospitals are a different story: They consume twice as much energy per square foot as hotels, and lead schools and office buildings by an even greater margin. And their work couldn’t be more vital as they confront the novel coronavirus.

Knowing that, Sawyer said, puts the ordinary routines of his job, the things about it he usually takes for granted, into perspective.

“Keeping the lights on: It comes to the forefront a little more when you understand, ‘I’m going to be sequestered on site to do this job, it’s so critical,’” he said, speaking by phone from his office in East Greenbush, N.Y., where he has been living in a trailer, away from his family, since March 23.

As coronavirus hospitalizations in New York began to peak in April, emergency medicine physician Howard Greller recorded his reflections. (Whitney Leaming/The Washington Post)
Sawyer, 53, is a former submariner in the U.S. Navy, so he has experience when it comes to being isolated from friends and family for long periods. Many of his colleagues in isolation, who all volunteered for the duty, also are military veterans, and they’re familiar with the drill. Life in East Greenbush has advantages over a submarine — you can go outside and throw a football or Frisbee or walk or run the trail on the company campus reserved for the operators, and every day you can use FaceTime or Skype to talk with your family.

His wife understood, he said, though “of course it’s a sacrifice.” But she grasped the obligation he felt to be there with his colleagues and keep the power on.

“It’s a new world, it’s definitely an adjustment,” said Rich Dewey, the system’s CEO. “But we’re not letting a little virus slow us down.”

There are 31 operators, two managers and four cooks and cleaners all divided between East Greenbush, which handles daytime traffic, and another installation just west of Albany in Guilderland, which works at night. The operators work 12-hour shifts every other day.

Computers recalibrate generation, statewide, to equal demand, digesting tens of thousands of data points, every six seconds. Other computers forecast the needs looking ahead 2½ hours. The operators monitor the computers and handle the “contingencies” that inevitably arise.

They dispatch the electricity along transmission lines ranging from 115,000 volts to 765,000 volts, much of it going from plants and dams in western and northern New York downstate toward the city and Long Island.

They always focus on: “What is the next worse thing that can happen, and how can we respond to that?” Sawyer said.

It’s the same shift and the same work they’ve always done, and that gives this moment an oddly normal feeling, he said. “There’s a routine to it that some of the people working at home now don’t have.”

Medical workers check in with them daily to monitor their physical health and mental condition. So far, there have been no dropouts.

Statewide, the daily demand for electricity has fallen nearly 9 percent.

The distribution system in New England is looking at a 3 to 5 percent decline; the Mid-Atlantic states at 5 to 7 percent; Washington state at 10 percent; and California by nearly as much. In Texas, demand is down 2 percent, “but even there you’re still seeing drops in the early-morning hours,” said Travis Whalen, a utility analyst with S&P Global Platts.

In the huge operating system that embraces much of the middle of the country, usage has fallen more than 8 percent — and the slow morning surge doesn’t peak until noon.

In New York, there used to be a smaller evening spike, too (though starting from a higher load level than the one in the morning). But that’s almost impossible to see anymore because everyone isn’t coming home and turning on the lights and TV and maybe throwing a load in the laundry all at once. No one goes out, either, and the lights aren’t so bright on Broadway.

California, in contrast, had a bigger spike in the evening than in the morning before covid-19 hit; maybe some of that had to do with the large number of early risers spreading out the morning demand. Both spikes have flattened but are still detectable, and the evening rise is still the larger.

Only at midnight, in New York and elsewhere, does the load resemble what it used to look like.

The wholesale price of electricity has fallen about 40 percent in the past month, according to a study by S&P Global Platts. In California it’s down about 30 percent. In a section covered by the Southwest Power Pool, the price is down 40 percent from a year ago, and in Indiana, electricity sold to utilities is cheaper than it has been in six years.

Some of the merchant generators “are going to be facing some rather large losses,” said Manan Ahuja, also an analyst with S&P Global Platts. With gas so cheap, coal has built up until stockpiles average a 90-day supply, which is unusually large. Ahuja said he believes renewable generators of electricity will be especially vulnerable because as demand slackens it’s easier for operators to fine-tune the output from traditional power plants.

As Dewey put it, speaking of solar and wind generators, “You can dispatch them down but you can’t dispatch them up. You can’t make the wind blow or the sun shine.”

Jason Tundermann, a vice president at Level 10 Energy, which promotes renewables, argued that before the morning and evening spikes flattened they were particularly profitable for fossil fuel plants. He suggested electricity demand will certainly pick up again. But an issue for renewable projects under development is that supply chain disruptions could cause them to miss tax credit deadlines.

With demand “on pause,” as Sawyer put it, and consumption more evenly spread through the day, the control room operators in East Greenbush have a somewhat different set of challenges. The main one, he said, is to be sure not to let those high-voltage transmission lines overload. Nuclear power shows up as a steady constant on the real-time dashboard; hydropower is much more up and down, depending on the capacity of transmission lines from the far northern and western parts of the state.

Some human habits are more reliably fixed. The wastewater that moves through New York City’s sewers — at a considerably slower pace than the electricity in the nearby wires — hasn’t shown any change in rhythm since the coronavirus struck, according to Edward Timbers, a spokesman for the city’s Department of Environmental Protection. People may be sleeping a little later, but the “big flush” still arrives at the wastewater treatment plants, about three hours or so downstream from the typical home or apartment, every day in the late morning, just as it always has.