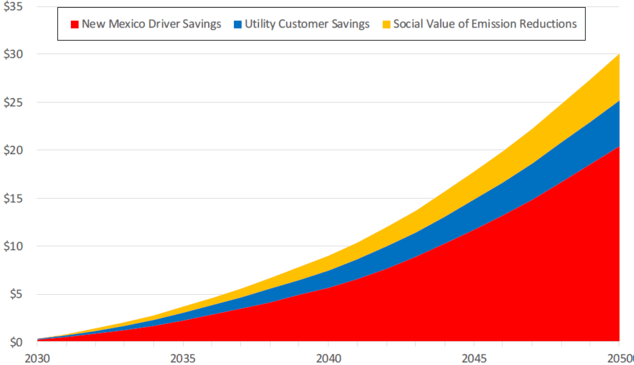 PHOENIX - What would happen if New Mexicans ditched gasoline and started to drive on cleaner, cheaper electricity? A new report from MJ Bradley & Associates, commissioned by NRDC and Southwest Energy Efficiency Project, answers that question, demonstrating that New Mexico could realize $30 billion in avoided expenditures on gasoline and maintenance, reduced utility bills, and environmental benefits by 2050. The state is currently considering legislation to jump-start that transition by providing consumers incentives to support electric vehicle (EV) purchases and the installation of charging stations, a policy that would require a few million dollars in lost tax revenue. The report shows an investment of this kind could yield tens of billions of dollars in net benefits.

EVs save families money because driving on electricity in New Mexico is the cost-equivalent of driving on $1.11 per gallon gasoline. Furthermore, EVs have fewer moving parts and less required maintenance—no oil changes, no transmissions, no mufflers, no timing belts, etc. That means that tackling the nation’s largest source of carbon pollution, transportation, could save New Mexicans over $20 billion by 2050 because EVs are cheaper to charge and maintain than gas powered cars.

Those are savings New Mexico can bank on because the price of electricity is significantly cheaper than the price of gasoline and also inherently more stable. Electricity is made from a diverse supply of domestic and increasingly clean resources. Unlike the volatile world oil market, New Mexico’s electric sector is regulated by the state’s utility commission. Adjusted for inflation, the price of electricity has been steady around the dollar-a-gallon equivalent mark in New Mexico for the last 20 years, while gas prices jump up or down radically and unpredictably.

New Mexico can charge millions of EVs without the need to make significant investments in the electric grid. This is because EVs can be charged when the grid is underutilized and renewable energy is abundant, like when people are sleeping overnight when wind energy generation often peaks. And the billions of dollars in new utility revenue from EV charging in excess of associated costs will be automatically returned to utility customers per an accounting mechanism that is already in state law that requires downward adjustment of rates when sales increase. Accordingly, widespread EV adoption could reduce every utility customer’s electric bill.

The report estimates that widespread EV adoption would dramatically reduce emissions of greenhouse gases from passenger vehicles in New Mexico, and also cut emissions of NOx, a local pollutant that threatens the health off all New Mexicans, especially children and people with respiratory conditions. The report finds growing the state’s EV market to meet New Mexico’s long-term environmental goals would yield $4.8 billion in societal benefits.

The Bottom Line: New Mexico Should Act Now to Accelerate its EV Market

Adding it all up, that’s more than $30 billion in potential benefits to New Mexico by 2050. Here’s the catch: as of June 2019, there were only 2,500 EVs registered in New Mexico, which means the state needs to accelerate the EV market to capture those billions of dollars in potential benefits. Thankfully, with second generation, longer range, affordable EVs now available, the market is well positioned to expand rapidly as the state moves to adopt Clean Car Standards that will ensure EVs are available for purchase in the state.

New Mexico has enormous amounts to gain from a small investment in incentives that support EV adoption now. For that investment to pay off, it needs to send a clear and unambiguous signal. Unfortunately, the same legislation that would establish tax credits to increase consumer access to electric vehicles in New Mexico was recently amended so it would not be helpful for 80 percent of consumers who lease, instead of buying EVs. And it would penalize EV drivers at the same time—with a $100 annual increase in registration fees to make up for lost gas tax revenue. That’s significantly more than what drivers of new gasoline vehicles pay annually in gas taxes in the state. Consumer Reports recently analyzed the growing trend to unfairly penalize electric cars via disproportionately high registration fees. In doing so, it estimated that the “maximum justifiable fee” to replace gas tax revenue in New Mexico would be $53. Anything higher will only slow or stop benefits New Mexico can attain from moving to cleaner cars.

To be clear, everyone should pay their fair share to maintain the transportation system, but EVs are not the problem when it comes to lost gas tax revenue. We need a comprehensive solution that addresses the real sources of transportation revenue loss while not undermining efforts to reduce dependence on gasoline. Thankfully, that can be done. For more, see A Simple Way to Fix the Gas Tax Forever.