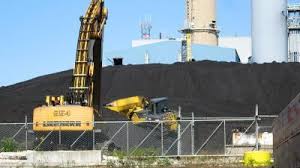 CONCORD - Electricity ratepayers in New England will pay tens of millions of dollars to fossil fuel and nuclear power plants later this decade under a program that proponents say is needed to keep the lights on during severe winters but which critics call a subsidy with little benefit to consumers or the grid.

Last week the Federal Energy Regulatory Commission said ISO-New England, which runs the six-state power grid, can create what it calls the Inventoried Energy Program or IEP. This basically will pay certain power plants to stockpile of fuel for use in emergencies during two upcoming winters as longer-term solutions are developed.

The federal commission called it a reasonable short-term solution to avoid brownouts which doesn’t favor any given technology.

Not all agree, however, including FERC Commissioner Richard Glick, who wrote a fiery dissent to the other three commissioners.

“The program will hand out tens of millions of dollars to nuclear, coal and hydropower generators without any indication that those payments will cause the slightest change in those generators’ behavior,” Glick wrote. “Handing out money for nothing is a windfall, not a just and reasonable rate.”

The program is the latest reaction by ISO-NE to the winter of 2013-14 when New England almost saw brownouts because of a shortage of natural gas to create electricity during a pair of week-long deep freezes.

ISO-New England says the situation is more critical now because of the possible retirement of the gas-fired Mystic Generating Station in Massachusetts. As with closed nuclear plants such as Vermont Yankee and Pilgrim in Massachusetts, power plant owners say lower electricity prices, partly due to cheap renewables and partly to stagnant demand, means they can’t be profitable just by selling power.

Programs like the IEP are meant to subsidize such plants – “incentivize” is the industry term – so they’ll stay open if they are needed.

The IEP approved last week will be applied to the winters of 2023 and 2024, after a different subsidy program expires. It sets prices for stocking certain amounts of fuel and payments during any “trigger” event, defined as a day when the average of high and low temperatures at Bradley International Airport in Connecticut is no more than 17 degrees Fahrenheit.

These payments will be made on top of a complex system of auctions used to decide how much various plants get paid for generating electricity at which times.

ISO-NE estimates the new program will cost between $102 million and $148 million each winter, depending on weather and market conditions.

It says the payments are open to plants that burn oil, coal, nuclear fuel, wood chips or trash; utility-scale battery storage facilities; and hydropower dams “that store water in a pond or reservoir.” Natural gas plants can participate if they guarantee to have fuel available, but that seems less likely because of winter heating contracts.

A major complaint and groups that filed petitions opposing the project is that ISO-NE presented little supporting evidence of how prices, amount and overall cost were determined. ISO-NE argued that there wasn’t time for such analysis before the Mystic shutdown, and FERC agreed.

“The proposal is a step in the right direction … while ISO-NE finishes developing a long-term market solution,” the commission said in its ruling.

The program is the latest example of complexities facing the nation’s electricity system evolves in the face of solar and wind power, which produce electricity so cheaply that they can render traditional power uneconomic but which can’t always produce power on demand. Another major factor is climate change, which has increased the pressure to support renewable alternatives to plants that burn fossil fuels, as well as stagnant electricity demand caused by increased efficiency.

Opponents, including many environmental groups, say electricity utilities and regulators are too quick to prop up existing systems, built when electricity was sent one way from a few big plants to many customers. They argue that to combat climate change as well as limit cost, the emphasis must be on developing “non-wire alternatives” such as smart systems for controlling demand, in order to take advantage of the current system in which electricity goes two ways, such as from rooftop solar back into the grid.