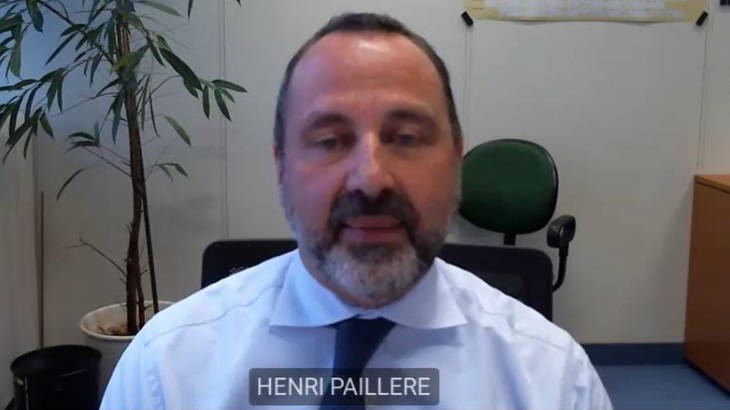 LONDON - By Dr Henri Paillere, Head of the Planning and Economics Studies Section of the IAEA

Decarbonising the power sector will not be sufficient to achieving net-zero emissions. We also need to decarbonise the non-power sectors - transport, buildings and industry - which represent 60% of emissions from the energy sector today. The way to do that is: electrification with low-carbon electricity as much as possible; using low-carbon heat sources; and using low-carbon fuels, including hydrogen, produced from clean electricity.
The International Energy Agency (IEA) says that: 'Almost half of the emissions reductions needed to reach net zero by 2050 will need to come from technologies that have not reached the market today.' So there is a need to innovate and push the research, development and deployment of technologies. That includes nuclear beyond electricity.

Today, most of the scenario projections see nuclear's role ONLY in the power sector, but increased electrification will require more low-carbon electricity, so potentially more nuclear. Nuclear energy is also a source of low-carbon heat, and could also be used to produce low-carbon fuels such as hydrogen. This is a virtually untapped potential.

There is an opportunity for the nuclear energy sector - from advanced reactors, small modular reactors, and non-power applications - but it requires a level playing field, not only in terms of financing today's technologies, but also in terms of promoting innovation and supporting research up to market deployment. And of course technology readiness and economics will be key to their success.

On process heat and district heating, I would draw attention to the fact there have been decades of experience in nuclear district heating. Not well spread, but experience nonetheless, in Russia, Hungary and Switzerland. Last year, we had two new projects. One floating nuclear power plant in Russia (Akademik Lomonosov), which provides not only electricity but district heating to the region of Pevek where it is connected. And in China, the Haiyang nuclear power plant (AP1000 technology) has started delivering commercial district heating. In China, there is an additional motivation to reducing emissions, namely to cut air pollution because in northern China a lot of the heating in winter is provided by coal-fired boilers. By going nuclear with district heating they are therefore cutting down on this pollution and helping with reducing carbon emissions as well. And Poland is looking at high-temperature reactors to replace its fleet of coal-fired boilers and so that's a technology that could also be a game-changer on the industry side.

There have also been decades of research into the production of hydrogen using nuclear energy, but no real deployment. Now, from a climate point of view, there is a clear drive to find substitute fuels for the hydrocarbon fuels that we use today. In the near term, we will be able to produce hydrogen with electrolysis using low-carbon electricity, from renewables and nuclear. But the cheapest source of low-carbon power is from the long-term operation of existing nuclear power plants which, combined with their high capacity factors, can give the cheapest low-carbon hydrogen of all.

In the mid to long term, there is research on-going with processes that are more efficient than low-temperature electrolysis, which is high temperature steam electrolysis or thermal splitting of water. These may offer higher efficiencies and effectiveness but they also require advanced reactors that are still under development. Demonstration projects are being considered in several countries and we at the IAEA are developing a publication that looks into the business opportunities for nuclear production of hydrogen from existing reactors. In some countries, there is a need to boost the economics of the existing fleet, especially in the electricity systems where you have low or even negative market prices for electricity. So, we are looking at other products that have higher values to improve the competitiveness of existing nuclear power plants.

The future means not only looking at electricity, but also at industry and transport, and so integrated energy systems. Electricity will be the main workhorse of our global decarbonisation effort, but through heat and hydrogen. How you model this is the object of a lot of research work being done by different institutes and we at the IAEA are developing some modelling capabilities with the objective of optimising low-carbon emissions and overall costs.

This is just a picture of what the future might look like: a low-carbon power system with nuclear lightwater reactors (large reactors, small modular reactors and fast reactors); solar, wind, anything that produces low-carbon electricity that can be used to electrify industry, transport, and the heating and cooling of buildings. But we know there is a need for high-temperature process steam that electricity cannot bring but which can be delivered directly by high-temperature reactors. And there are a number of ways of producing low-carbon hydrogen. The beauty of hydrogen is that it can be stored and it could possibly be injected into gas networks that could be run in the future on 100% hydrogen, and this could be converted back into electricity.

So, for decarbonising power, there are many options - nuclear, hydro, variable renewables, and fossil with carbon capture and storage - and it's up to countries and industries to invest in the ones they prefer. We find that nuclear can actually reduce the overall cost of systems due to its dispatchability and the fact that variable renewables have a cost because of their intermittency. There is a need for appropriate market designs and the role of governments to encourage investments in nuclear.

Decarbonising other sectors will be as important as decarbonising electricity, from ways to produce low-carbon heat and low-carbon hydrogen. It's not so obvious who will be the clear winners, but I would say that since nuclear can produce all three low-carbon vectors - electricity, heat and hydrogen - it should have the advantage.
We at the IAEA will be organising a webinar next month with the IEA looking at long-term nuclear projections in a net-zero world. That will be our contribution from the point of view of nuclear to the IEA's special report on roadmaps to net zero that it will publish in May.