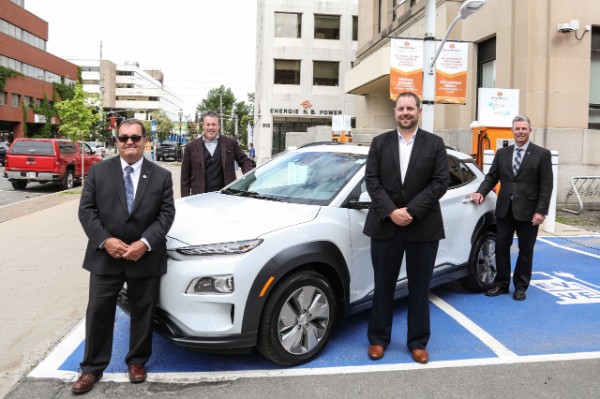 FREDERICTON - New Brunswickers looking for an electric vehicle (EV) can now claim up to $10,000 in rebates from the provincial and federal governments.

The three-year provincial program was announced Thursday and will give rebates of $5,000 on new EVs and $2,500 on used ones. It closely mirrors the federal program and is stackable, meaning new owners will be able to claim up to $5,000 from the feds as well.

Minister of Environment and Climate Change Gary Crossman said the move is hoped to kickstart the province’s push toward a target of having 20,000 EVs on the road by 2030.

“This incentive has to make a positive difference,” Crossman said.

“I truly believe people have been waiting for it, they’ve been asking about it, and this will make a difference from today moving forward to put new or used cars in their hands.”

The first year of the program will cost $1.95 million, which will come from the $36 million in the Climate Change Fund and will be run by NB Power. The department says if the full amount is used this year it could represent a reduction of 850 tonnes of greenhouse gasses (GHGs) annually.

Both the Liberal and Green parties welcomed the move calling it long overdue, but Green MLA Kevin Arseneau said it’s not a “miracle solution.”

“Yes, we need to electrify cars, but this kind of initiative without proper funding of public transportation, urban planning for biking … without this kind of global approach this is just another swipe of a sword in water,” he said.

Liberal environment critic Francine Landry says she hopes this will make the difference for those considering the purchase of an EV and says the government should consider further methods of incentivization like waiving registration fees.

The province’s adoption of EVs has not been overly successful so far. At the end of 2020, there were 646 EVs registered in the province, far short of the 2,500 target set out in the Climate Action Plan. That was up significantly from the 437 at the end of 2019, but still a long way from the goal.

New Brunswick has a fairly expansive network of charging stations across the province, claiming to be the first “fully-connected province” in the country, and had hoped that the available infrastructure would push adoption of non-emitting vehicles.

“In 2017 we had 11 chargers in the province, so we’ve come a long way from an infrastructure standpoint which I think is critical to promoting or having an electric vehicle network, or a number of electric vehicles operating in the province,” said Deputy Minister of Natural Resources Tom Macfarlane at a meeting of the standing committee on climate change and environmental stewardship in January of 2020.

The newly announced program will also cover 50 per cent of costs for a home charging station up to $750 to further address infrastructure needs.

The New Brunswick Lung Association is applauding the rebate plan.

President and CEO Melanie Langille said about 15,000 Canadians, including 40 people from New Brunswick, die prematurely each year from air pollution. She said vehicle emissions account for about 30 per cent of the province’s air pollution.

“Electric vehicles are critical to reducing our greenhouse gas emissions,” said Langille. “New Brunswick has one of the highest per capita GHG emissions in Canada. But, because our electricity source in New Brunswick is primarily from non-emitting sources, switching to an EV is an effective way for New Brunswickers to lower their GHG emissions.”

Langille said the lung association has been part of an electric vehicles advisory group in the province since 2014 and its research has shown this type of program is needed.

“The major barrier that is standing in the way of New Brunswickers adopting electric vehicles is the upfront costs,” Langille said. “So today’s announcement, and that it can be stacked on top of the existing federal rebates, is a huge step forward for us.”