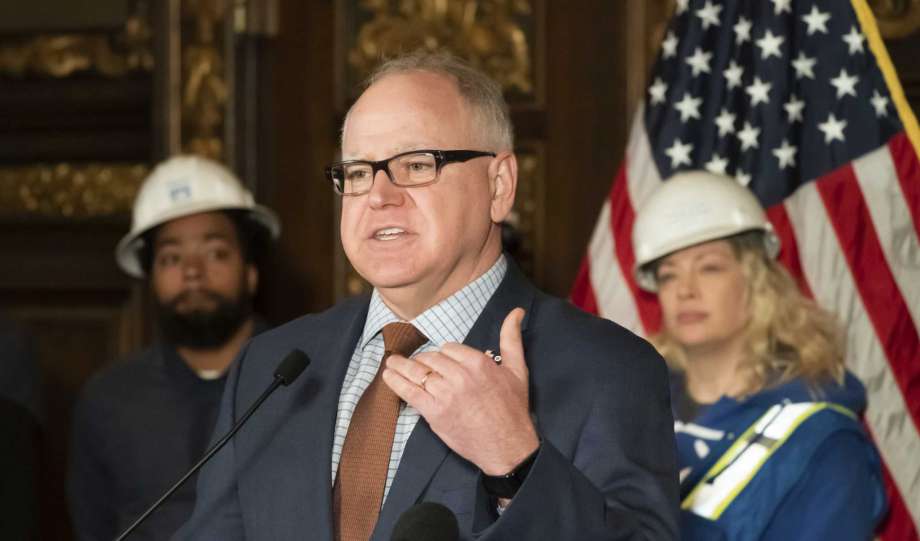 ST. PAUL - Gov. Tim Walz's plan for Minnesota to get 100 percent of its electricity from carbon-free sources by 2050 was criticized Tuesday at its first legislative hearing, with representatives from some of the state's smaller utilities saying they can't meet that goal.

Commerce Commissioner Steve Kelley told the House climate committee that the Democratic governor's plan is ambitious. But he said the state's generating system is "aging and at a critical juncture," with plants that produce 70 percent of the state's electricity coming up for potential retirement over the next two decades. He said it will ensure that utilities replace them with wind, solar and other innovative sources, and increased energy efficiency, before turning to fossil fuels.

"Utilities will simply need to demonstrate why clean energy would not work whenever they propose to replace or add new generating capacity," he said.

Walz's plan, announced last week, seeks to build on the success of a 2007 law that required Minnesota utilities to get at least 25 percent of their electricity from renewable sources by 2025. The state largely achieved that goal in 2017 thanks to the growth of wind and solar power, and the topic of climate change has only grown hotter, hence the new goal for 2050.

But Joel Johnson, a lobbyist for the Minnkota Power Cooperative, testified that the governor's plan is "misguided and unrealistic" even with new technology to capture carbon dioxide emissions from power plants. Johnson added that even the big utilities that have set goals of going carbon-free by mid-century, such as Minneapolis-based Xcel Energy, acknowledge they don't know yet how they'll hit the target.

Tim Sullivan, president and CEO of the Wright-Hennepin Cooperative Electric Association in the Twin Cities area, said the plan is a "bad idea" for the 1.7 million state electric consumers served by cooperatives. He said Minnesota is a "minuscule contributor" to total global carbon emissions.

"The bill would have a devastating impact on electric consumers," Sullivan said. "It represents, in our view, nothing short of a first-order threat to the safety and reliability of Minnesota's grid."

Isaac Orr is a policy fellow at the Minnesota-based conservative think tank, the Center for the American Experiment, which released a report critical of the plan Tuesday. Orr said all Minnesota households would face higher energy costs and it would harm energy-intensive industries such as mining, manufacturing and health care, while doing little to reduce global warming.

"This does not pass a proper cost-benefit analysis," he testified.

Environmental groups, including Conservation Minnesota and the Sierra Club, supported the proposal while acknowledging the challenges.

"Our governor has called climate change an existential crisis," said Kevin Lee, director of the climate and energy program at the Minnesota Center for Environmental Advocacy. "This problem is the defining challenge of our time, and it can feel overwhelming."

Rep. Jean Wagenius, the committee chairwoman and Minneapolis Democrat who's held several hearings on the threats that climate change poses, said she expected to table the bill for further consideration after taking more testimony in the evening and would not hold a vote Tuesday.

While the bill has support in the Democratic-controlled House, it's not scheduled for action in the Republican-led Senate. Rep. Pat Garofalo, a Farmington Republican, quipped that it "has a worse chance of becoming law than me being named the starting quarterback for the Minnesota Vikings."