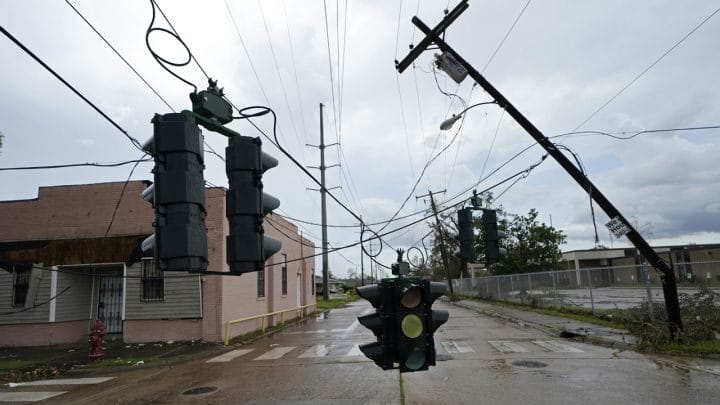 The Category 4 hurricane made landfall last Thursday just south of Lake Charles near Cameron, damaging or destroying thousands of electric poles as well as leaving "catastrophic damages" to the transmission system for southwest Louisiana.

“This is not a restoration," Entergy Louisiana president and CEO Phillip May said in a statement. "It’s almost a complete rebuild of our transmission and distribution system that serves Calcasieu and Cameron parishes.”

According to Entergy, all nine transmission lines that deliver power into the Lake Charles area are currently out service due to storm damage to multiple structures and spans of wire.

The transmission system is a critical component in the delivery of power to customers’ homes, according to the company.

Of those structures impacted, many were damaged "beyond repair" and require complete replacement.

Some 8,300 workers are now in the area working to rebuild the transmission lines, but Entergy said that it will be about two to three weeks before power is available to customers in the Lake Charles area.

"Restoring power will take longer to customers in inaccessible areas of the region," the company said. "While not impacting the expected restoration of service to residential customers, initial estimates are it will take weeks to rebuild all transmission lines in Calcasieu and Cameron parishes."

Entergy Louisiana expects to energize the first of its transmission lines into Lake Charles in two weeks.

“We understand going without power for this extended period will be challenging, and this is not the news customers want to hear. But we have thousands of workers dedicated to rebuilding our grid as quickly as they safely can to return some normalcy to our customers’ lives,” May said.

According to power outage tracking website poweroutage.us, over 164,000 customers remain without service in Louisiana as of Thursday morning.

On Wednesday, the Edison Electric Institute, the association of investor-owned electric companies in the U.S., said in a statement to FOX Business that electricity has been restored to approximately 737,000 customers, or 75% of those impacted by the storm across Louisiana, eastern Texas, Mississippi, and Arkansas.

At least 29,000 workers from 29 states, the District of Columbia and Canada are working to restore power in the region, according to the Electricity Subsector Coordinating Council (ESCC), which is coordinating efforts from government and power industry.

“The transmission loss in Louisiana is significant, with more than 1,000 transmission structures damaged or destroyed by the storm," Department of Energy (DOE) Deputy Secretary Mark Menezes said in a statement. Rebuilding the transmission system is essential to the overall restoration effort and will take weeks given the massive scale and complexity of the work. We will continue to coordinate closely to ensure the full capabilities of the industry and government are marshaled to rebuild this critical infrastructure as quickly as possible.”

At least 17 deaths in Louisiana have been attributed to the storm; more than half of those killed by carbon monoxide poisoning from the unsafe operation of generators. Two additional deaths were verified on Wednesday in Beauregard Parish, which health officials said were due to heat-related illness following the storm.