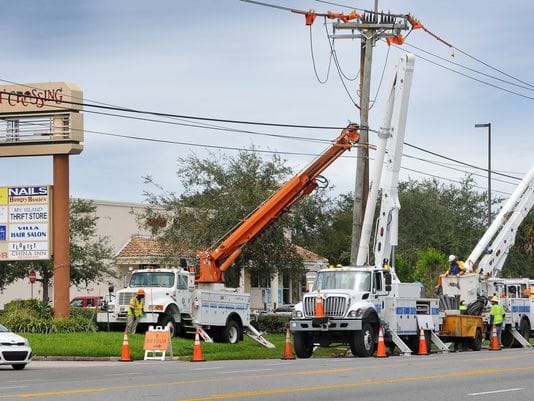 MIAMI - Teams of Florida Power & Light linemen, assisted by thousands of out-of-state utility workers, scrambled across Florida Monday to tackle the Herculean task of turning the lights back on in the Sunshine State.

The job is quite simply mind-boggling as Irma caused extensive damages to the power grid and the outages have broken previous records.

By 3 p.m. Monday, some 3.47 million of the company's 4.9 million customers in Florida were without power. This breaks the record of 3.24 million knocked off the grid during Hurricane Wilma in 2005, according to FPL spokesman Bill Orlove.

Even with what is believed to be the largest assembly of utility workers ever assembled for a single storm in the United States, power restoration is expected to take several days, if not weeks, in some areas.

FPL vowed to work as quickly as possible as they assess the damage and send out crews to restore power.

"We understand that people need to have power right away to get their lives back to normal," Daly said.

The priority, she said, were medical and emergency management facilities and then essential service providers like gas stations and grocery stores.

After that, FPL will endeavor to repair the problems that will restore power to the maximum number of people possible. Then it's individual neighborhoods.

Daly was unable to say Monday how many crews FPL had working in Brevard County. In some areas, power came back relatively swiftly, much quicker than expected.

" I was definitely surprised at how quickly they got our power back on here in NE Palm Bay," said Kelli Coats. "We lost power last night around 9 p.m Sunday and regained power around 8:30 a.m. today."

Others, many of them beachside, were looking at a full 24 hours without power and it's possible it could extend into Tuesday or longer.

One reason for improved response times since 2005, Daly said, is the installation of nearly 5 million "Smart Meters" at residences. These new devices, which replaced older analog models, allows FPL crews to track a neighborhood's power status via handheld computers, pinpointing the cause of an outage so it can be repaired.

Quick restoration is key as stores and restaurants struggle to re-open. Without electricity many of them just can't re-start operations and get goods and services to consumers.

At the Atlanta-based Waffle House, which Federal Emergency Management Administration use to gauge the severity of damage and service to an area, restaurant executives are reviewing its operations in Florida and should have a better handle Monday afternoon how quickly restaurants will re-open.

"Right now, we're in an assessment phase," said Pat Warner, spokesman for Waffle House. "We're looking at which stores have power and which ones have damage."

FEMA's color-coded Waffle House Index started after the hurricanes in the early 2000s. It works like this: When an official phones a Waffle House to see if it is open,  the next stop is to assess it's level of service. If it's open and serving a full menu, the index is green. When the restaurant is open but serving a limited menu, it's yellow. When it's closed, it's red.