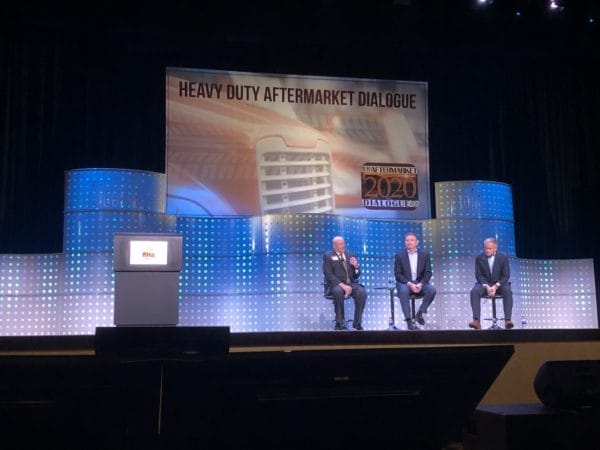 GRAPEVINE, Texas - Those who sell parts and repair trucks might feel uneasy when reports emerge about a coming generation of electric trucks.

There are reportedly about 33% fewer parts to consider when internal combustion engines and transmissions are replaced by electric motors. Features such as regenerative braking are expected to dramatically reduce brake wear. As for many of the fluids needed to keep components moving? They can remain in their tanks and drums.

Think of them as disruptors. But presenters during the annual Heavy Duty Aftermarket Dialogue are stressing that the changes are not coming overnight. Chris Patterson, a consultant and former Daimler Trucks North America CEO, counts just 50 electrified heavy trucks in North America.

About 88% of today’s trucks run on diesel, with the remaining 12% mostly powered by gasoline, said John Blodgett, MacKay and Company’s vice-president of sales and marketing. The volume of natural gas equipment barely marks a single percentage point. Five years out, he expects 1% to be electric, 2% to be natural gas, 12% to be gasoline, and 84% on diesel.

But a decade from now, forecasts suggest a split of 76% diesel, 11% gasoline, 7% electric, and 5% natural gas, with a fraction of a percent relying on hydrogen-electric power. Existing internal combustion engines will still be in service, and need to be serviced, but aftermarket suppliers are now preparing for their roles in the mix.

“This is real, for sure,” said Delphi Technologies CEO Rick Dauch.

Aftermarket support is needed
“As programs are launched five to six years from now, what are the parts coming back?” he asked the crowd. “Braking and steering. The fuel injection business will go down, but not for 20-25 years.” The electric vehicles will also require a gear box and motor.

“You still have a business model,” he assured the crowd of aftermarket professionals.

“We’ve got a billion-dollar business in electrification, last year down $200 million because of the downturn in light-duty diesel controllers,” Dauch said. “We think we’re going to double our electrification business in five years.”

Deciding when the market will emerge is no small task, however. One new plant in China offered manufacturing capacity in July 2019, but it has yet to make any electric vehicle parts because the Chinese government changed the incentive plans for electric vehicles.

‘All in’ on electric vehicles
Dana has also gone “all in” on electrification, said chairman and CEO Jim Kamsickas, referring to Dana’s work on e-drives with Kenworth and Peterbilt. Its gasket business is focusing on the needs of battery cooling systems and enclosures.

But he also puts the demand for new electric vehicle systems in perspective. “The mechanical piece is still going to be there.”

The demand for the new components and systems, however, has both companies challenged to find enough capable software engineers. Delphi has 1,600 of them now, and it needs more.

Dauch noted that Delphi will leave the capital-intensive work of producing batteries to other companies in markets like China and Korea. “We’re going to make the systems that are in between – inverters, chargers, battery management systems,” he said.

Difficult change
But people working for European companies that have been built around diesel components are facing difficult days. Dauch refers to one German village with a population of 1,200, about 800 of whom build diesel engine parts. That business is working furiously to shift to producing gasoline parts.

Electrification will face hurdles of its own, of course. Major cities around the world are looking to ban diesel-powered vehicles by 2050, but they still lack the infrastructure needed to charge all the cars, he added.

“This is great,” he said. “It’s making us all think a little differently. It’s just that business models have had to pivot – for you, for us, for everybody.”

They need to be balanced against other business demands, too.

Said Kamsickas: “Working through the disruption of electrification, it’s how do you financially manage that? Oh, by the way, the last time I checked there are [company] shareholders and stakeholders you need to take care of.”

“It’s going to be tough,” Dauch agreed, referring to the changes for suppliers. “The next three to four years are really going to be game changes. “There’ll be some survivors and some losers, that’s for sure.”