What's at stake if Davis-Besse and other nuclear plants close early? 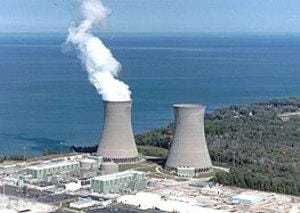 A national nuclear lobby wants to remind people what's at stake for Ohio and Pennsylvania if FirstEnergy Solutions follows through with plans to shut down three nuclear plants over the next three years, including its Davis-Besse nuclear plant east of Toledo.

A report issued Monday by Nuclear Matters largely echoes concerns raised by FES, a subsidiary of FirstEnergy Corp., and other supporters of nuclear power about economic and environmental hardships that will likely result from the planned closures.

Along with Davis-Besse, Perry nuclear plant east of Cleveland and the twin-reactor Beaver Valley nuclear complex west of Pittsburgh are slated to close.

"If these plants close, the livelihoods of thousands of Ohio and Pennsylvania residents will disappear. The over 3,000 highly skilled individuals directly employed by these sites will leave to seek employment at other facilities still operating around the country," Lonnie Stephenson, International Brotherhood of Electrical Workers president, said in a statement distributed by Nuclear Matters. Mr. Stephenson also serves on the Nuclear Matters advocacy council.

This new report and others like it are part of an extensive campaign by nuclear energy advocates to court state and federal legislators one more time for tens of millions of dollars of financial support or at least legislation that better suits the nuclear industry. Critics allege such pleas amount to a request for massive government bailouts.

The latest report was prepared for Nuclear Matters by the Brattle Group, a firm that specializes in analyzing economic, finance, and regulatory issues for corporations, law firms, and governments.

"These announced retirements create a real urgency to learn what would happen if these plants are lost," Dean Murphy, the Brattle report's lead author, said.

More than 3,000 jobs would be lost, as would millions of dollars in tax revenue. It also could take as long as 2034 for the region's climate-altering carbon emissions to be brought back down to existing levels, based on current growth projections for solar- and wind-powered projects, Mr. Murphy said.

His group's report only takes into account nuclear plant operations, though. Many of those who oppose nuclear power have long pointed out that mining uranium for nuclear plant fuel generates substantial emissions, as does the process of producing steel cladding for fuel bundles and the enrichment-production of that fuel. Still, nuclear has ranked among the better performers in reports that have taken such a broader look at overall emissions.

FES has accused the regional grid operator, PJM Interconnection, of creating market conditions that favor natural gas and, thus, make it almost impossible for nuclear to compete throughout its 13-state region.

PJM has strongly denied those accusations, and has said it anticipates no shortfalls in energy distribution if those nuclear plants close prematurely.

In addition to the three FES sites, the report includes information about the Three Mile Island Unit 1 plant near Harrisburg, Pa., which Chicago-based Exelon Generation Corp. has previously announced will be shut down in 2019. That plant and others are experiencing similar difficulties the FES plants face by competing in a market radically changed by record-low natural gas prices.