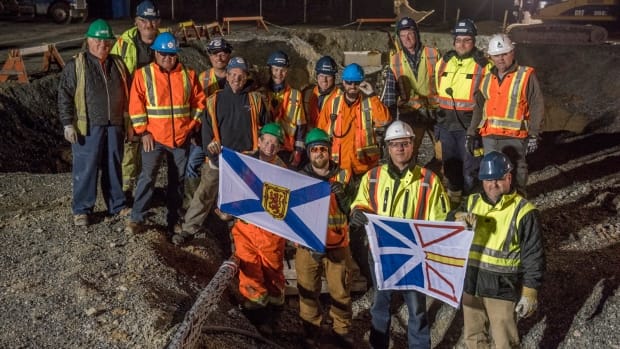 HALIFAX - The longest sub-sea electricity cable in North America now connects Nova Scotia and Newfoundland and Labrador, according to the company behind the $1.7-billion Maritime Link project.

The first of the project's two high-voltage power transmission cables was anchored at Point Aconi, N.S., on Sunday.

The 170-kilometre long cable across the Cabot Strait will connect the power grids in the two provinces. The link will allow power to flow between the two provinces, and bring to Nova Scotia electricity generated by the massive Muskrat Falls hydroelectric project in Labrador.

Ultimately, the Maritime Link will help Nova Scotia reach the renewable energy goals set out by the federal government, said Rick Janega, the president and CEO of Emera Newfoundland and Labrador, whose subsidiary owns the Maritime Link.

"If not for the Maritime Link then really the province would not have the ability to meet those requirements because we're pretty much tapped out of all the hydro in province and all the wind generation without creating new interconnections like the Maritime Link," said Janega.

Not everyone wanted the link

Fishermen in Cape Breton had objected to the Maritime Link. They were concerned about how the undersea cable might affect fish in the area.

The laying of the cable and other construction closed a three-kilometre long and 600-metre wide swath of ocean bottom to fishermen for the entire 2017 lobster season.

But the company came to an agreement to compensate a group of 60 Cape Breton lobster and crab fishermen affected by the project this season. The terms of the compensation deal were not released.

Installation of the second cable is set to begin in June. The entire link should be completed by late 2017 and should go into full service by January 2018.

"We're quite confident as soon as the Maritime Link is in service there will be energy transactions between Nova Scotia Power and Newfoundland Hydro. Both utilities have already identified opportunities to save money and exchange energy between the two provinces," said Janega.

That's two years before power is expected to flow from the Muskrat Falls hydro project. The Labrador-based power generating facility has been hampered by delays.

Those kinds of delays are expected for such a large project, said Janega, and won't stop the Maritime Link from being used.

"With the Maritime Link going in service this year providing Nova Scotia the opportunity that it needs to be able to reach carbon reductions and to increase renewable energy content and we're very pleased to be at this state today," said Janega.