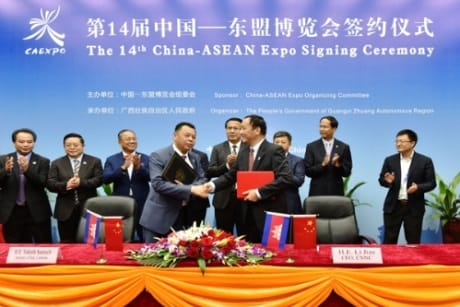 BEIJING - Cambodia has signed a memorandum of understanding with China National Nuclear Corporation (CNNC) on cooperation in the peaceful use of nuclear energy. The agreement calls for cooperation on human resources development.

The agreement was signed yesterday by CNNC chief accountant Li Jize and Tekreth Samrach, Cambodia's secretary of state of the Office of the Council of Ministers and vice chairman of the Cambodian Commission on Sustainable Development. It was signed during the 14th China-ASEAN Expo and China-ASEAN Business and Investment Summit, being held in Nanning, the capital of China's Guangxi province.

The signing was witnessed by Cambodia's minister of commerce and other government officials, CNNC said.

"This is another important initiative of China National Nuclear Corporation in implementing the 'One Belt, One Road' strategy and strengthening cooperation with ASEAN countries in international production capacity, laying a solid foundation for follow-up cooperation between the two countries," CNNC said.

One Belt, One Road is China's project to link trade in about 60 Asian and European countries along a new Silk Road.

In late August, CNNC president Qian Zhimin visited Cambodia and met Say Chhum, president of the Senate of Cambodia. Qian noted that CNNC will support Cambodia in applying nuclear technologies in industry, agriculture and medical science, thus developing its economy and improving the welfare of the population. Cambodia can start training workers, promoting new energy exploitation and infrastructure construction, and increasing its capabilities in scientific research and industrial manufacturing, he said. This will help the country achieve its long-term goal of the peaceful use of nuclear energy, he added.

In November 2015, Russian state nuclear corporation Rosatom signed a nuclear cooperation agreement with Cambodia, focused on a possible research reactor, but with consideration of nuclear power. A further cooperation agreement was signed in March 2016, and in May Rosatom and the National Council for Sustainable Development signed memoranda to establish a nuclear energy information centre in Cambodia and set up a joint working group on the peaceful uses of atomic energy.

In mid-2016, Cambodia's Ministry of Industry, Mines and Energy held discussions with CNNC on building a nuclear power plant and establishing the regulatory and legal infrastructure for that, in collaboration with the International Atomic Energy Agency.