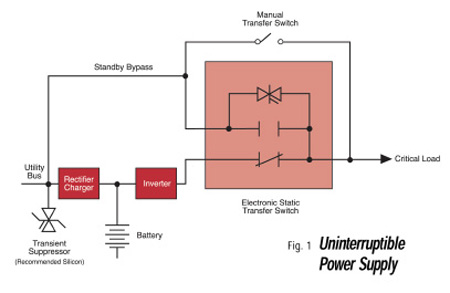 The use of computers and other electronic systems has skyrocketed, and with it, so has the need to protect these systems from damage and service interruptions. Uninterruptible and stand-by power systems were created to fill the gap when sudden power disturbances threaten the operation of electronic equipment. However, there is a general is conception that UPS systems offer adequate protection against all major power disturbance problems including outages, noise, line regulation and voltage transients.

Unfortunately, UPS systems often do not adequately protect against voltage transients. Using a UPS system as the sole source of protection from power problems will leave computers and other electronics vulnerable to several distinct risks. Three key equipment risks to consider when evaluating UPS or stand-by power systems are harmonic distortion, the volume of bypass mode switching, and transient surges.

HOW UPS AND STAND-BY SYSTEMS WORK

In a UPS system, alternate current (AC) utility voltage is converted to direct current (DC) voltage through the rectifier circuit in the converter section to charge the battery and supply the inverter. The inverter changes the DC voltage back to 60—cycle AC power to feed the attached equipment. When the utility AC voltage has failed or falls outside a preset electrical tolerance, the battery alone supplies DC voltage to the inverter section until the utility AC voltage is restored or the battery runs down.

A stand-by power supply consists of the same basic components as a UPS with a rectifier circuit maintaining a charge on a battery. The key difference is that a stand-by system operates primarily in the bypass mode, meaning the raw utility AC voltage passes directly through the system to the equipment load unless the utility voltage fails or runs outside set limits. When this happens, a transfer switch shifts the load to an inverter, changing battery power to AC until utility power is restored or the battery drains. Because the utility AC power must be outside preset limits before the equipment load is switched to the inverted battery power, this transfer can result in as much as a full cycle of voltage dropout.

Our tests on UPS systems also uncovered a higher than expected volume of switches to the bypass line, including instances when the test load was less than the unit’s load rating. This bypass switching can allow raw utility power and transient voltages directly through to the equipment load more often than expected. Of course, stand-by systems operate this way by design, but in both cases, raw power holds the potential to damage the equipment load.

A power line disturbance engineering study revealed that a mere 0.5 per cent of the power disturbances during the test period was due to outages, only an additional 11 per cent was attributed to over and under voltages. The majority, 88.5 per cent of occurring disturbances, was caused by transient voltage (DV/DT) conditions.