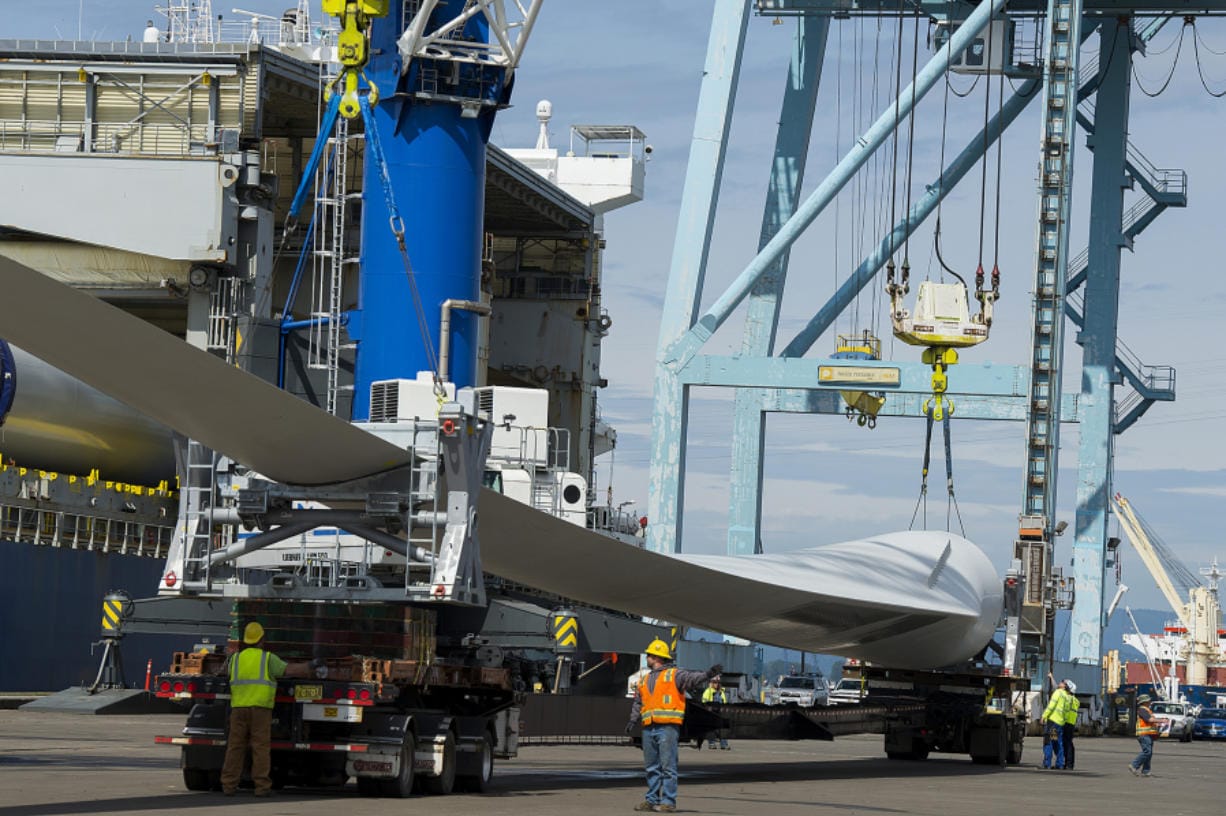 VANCOUVER - A set of 220-foot-long wind turbine blades arrived at the Port of Vancouver from China over the weekend as part a shipment bound for a wind farm in Canada.

They’re the largest blades ever handled by the port, and this summer, even larger blades will arrive — the largest North America has ever seen.

Alex Strogen described the scene as crews used two tandem cranes to unload 27 giant white blades from the MV Star Kilimanjaro, which picked up the wind turbine assemblies in China. They were manufactured by Goldwind Co.

“When you see these things come off and put onto these trailers, it’s exceptional in the sheer length of them,” Strogen said. “It looks as long as an airplane.”

In fact, each blade is about as long as the wingspan of a Boeing 747.

Groups of longshoremen attached the cranes to each blade and hoisted it into the air and onto a waiting truck. Metal cage-like devices on both ends kept the blades from touching the ground. Once loaded onto the trucks, the blades and shaft parts head to a terminal to be unloaded by another group of workers.

Another fleet of trucks will drive the wind turbines, towers and blades to Assiniboia, Saskatchewan, Canada, over the course of 21 weeks. Potentia Renewables of Toronto is erecting the turbines on 34,000 acres of leased agriculture land, according to a news release from the Port of Vancouver.

Potentia’s project, called the Golden South Wind Project, will generate approximately 900,000 megawatt-hours of electricity. It also has greatly reduced CO2 emissions compared with a coal-fired plant, according to the news release.

The project is expected to be operating in 2021.

The Port of Vancouver will receive 50 full turbines of two models for the project. In August, the larger of the models, with blades measuring 250 feet, will arrive. They’ll be the longest blades ever imported into any port in North America.

The Port of Vancouver is following all the recommended safety precautions during the COVID-19 pandemic, including social distancing and face masks, Strogen said.
As for crews onboard the ships, the U.S. Coast Guard is the agency in charge, and it is monitoring the last port-of-call for all vessels seeking to enter the Columbia River, Hart wrote in an email.

Vessel masters on each ship are responsible for monitoring the health of the crew and are required to report sick or ill crew members to the USCG prior to arrival or face fines and potential arrest.