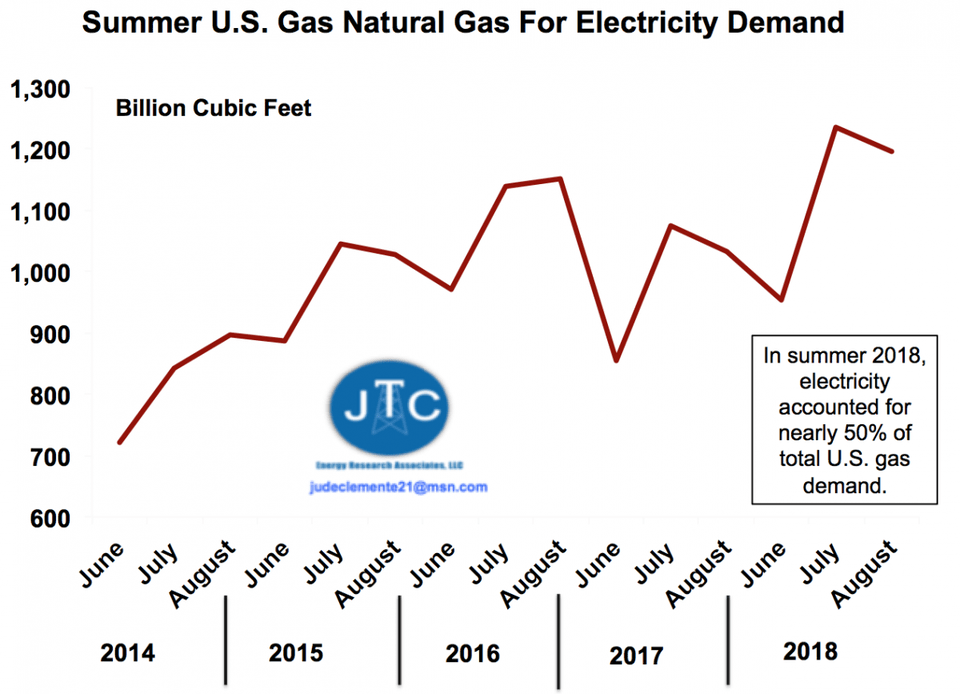 USA gas used for power has increased 35-40% over the past five years.

WASHINGTON - As the hot months linger, it will be natural gas that is leaned on most to supply the electricity that we need to run our air conditioners and keep us cool.

And this is surely a great and important thing: "Heat causes most weather-related deaths, National Weather Service says."

Generally, U.S. gas demand for power in summer is 35-40% higher than what it was five years ago, with so much more coming (see Figure).

The good news is regions across the country are expected to have plenty of reserves to keep up with power demand.

The only exception is ERCOT, covering 90% of the electric load in Texas, where a 9% reserve margin is expected, below the desired 14%.

Last summer, however, ERCOT’s reserve margin also was below the desired level, yet the grid operator maintained system reliability with no load curtailments.

Simply put, other states are very lucky that Texas has been able to maintain gas at 50% of its generation, despite being more than justified to drastically increase that.

At about 1,600 Bcf per year, the flatness of gas for power demand in Texas since 2000 has been truly remarkable, especially since Lone Star State production is up 50% since then.

Increasingly, other U.S. states (and even countries) are wanting to import huge amounts of gas from Texas, a state that yields over 25% of all U.S. output.

Yet if Texas justifiably ever wants to utilize more of its own gas, others would be significantly impacted.

In the near-term, this explains why a sweltering prolonged heat wave in July in Texas is the critical factor that could push up still very low gas prices.

But for California, our second highest gas using state, above-average snowpack should provide a stronger hydropower for this summer season relative to 2018.

Combined, Texas and California consume about 25% of U.S. gas, with Texas' use double that of California.

Across the U.S., gas could supply a record 40-43% of U.S. electricity this summer

Our gas used for power has increased 35-40% over the past five years.

Our gas used for power has increased 35-40% over the past five years. DATA SOURCE: EIA; JTC

Capacity wise, gas is sure to continue to surge its share 45% share of the U.S. power system.

"More than 60% of electric generating capacity installed in 2018 was fueled by natural gas."

We know that natural gas will continue to be the go-to power source: coal and nuclear plants are retiring, and while growing, wind and solar are too intermittent, geography limited, and transmission short to compensate like natural gas can.

Nuclear retirements this year include Pilgrim, Massachusetts’s only nuclear plant, and Three Mile Island in Pennsylvania.

This will take a combined ~1,600 MW of nuclear capacity offline.

As more nuclear plants close, EIA projects that net electricity generation from U.S. nuclear power reactors will fall by 17% by 2025.

Lower and lower projected commodity prices for gas encourage this immense gas build-out, not to mention non-stop increases in efficiency for gas-based units.

Remember that these are official U.S. Department of Energy estimates, not coming from the industry itself.

In other words, our Department of Energy concludes that gas is the future.

Our hotter and hotter summers are therefore more and more becoming: "summers for natural gas"

Ultimately, this shows why the anti-pipeline movement is so dangerous.

In April, President Trump signed two executive orders to promote energy infrastructure by directing federal agencies to remove bottlenecks for gas transport into the Northeast in particular and to streamline federal reviews of border-crossing pipelines and other infrastructure.

Builders, however, are not relying on outside help: all they know is that more U.S. gas demand is a constant, so more infrastructure is mandatory.

They are moving forward diligently: for example, there are now some 27 pipelines worth $33 billion already in the works in Appalachia.