The electricity consumed in Switzerland is ever greener, according to government statistics: some 62% comes from renewable sources, while nuclear has fallen to 17%.

The figures (in French/German)external link were released on Monday by the Federal Office of Energy, which gathers each year the sources used by electricity providers in Switzerland. The latest report refers to 2016.

As expected, hydropower is the biggest source of juice, at 56%. This marks an increase of 2.5 percentage points on the previous year. Other renewables – solar, wind, biomass and small-scale hydropower – made up 5.9%, a one-point increase on 2015.

Taken together, this means that just over three-fifths of electricity provided in the country in 2016 came from renewable sources, a figure helped by the slight decline in the use of nuclear, which fell from 20.7% to 17%.

Another 20% comes from unverified sources, which the energy office explains as energy used by high-consuming businesses which is often bought on the European market and not traced within Switzerland. Much of it may be fossil fuel burning.

Overall the figures tie in closely with the government’s Energy Strategy 2050external link, a sweeping plan endorsed by voters last year that aims to completely phase out nuclear by the mid-point of the century, as well as promote renewable sources and reduce consumption.

The electricity consumption figures should not be confused with those for overall energy produced, which (for reasons of import and export) are different: overall, 59% of the production total is hydropower, 33% remains nuclear, 5% other renewable, and 3% fossil fuels. 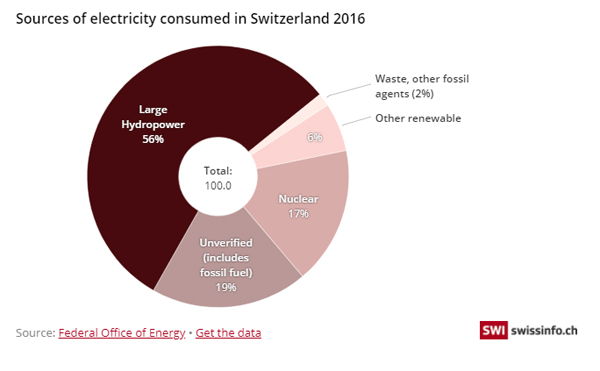