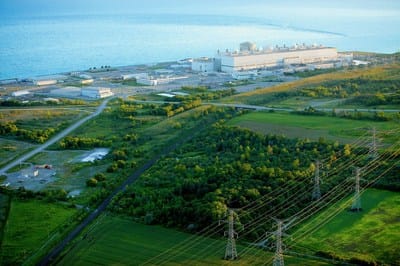 WASHINGTON - Two of North America's leading nuclear utilities unveiled a pioneering partnership to develop advanced nuclear technology as an integral part of a clean energy future and creating a North American energy hub. Ontario Power Generation and the Tennessee Valley Authority will jointly work to help develop small modular reactors as an effective long-term source of 24/7 carbon-free energy in both Canada and the U.S.

The agreement allows the companies to coordinate their explorations into the design, licensing, construction and operation of small modular reactors.

"As leaders in our industry and nations, OPG and TVA share a common goal to decarbonize energy generation while maintaining reliability and low-cost service, which our customers expect and deserve," said Jeff Lyash, TVA President and CEO. "Advanced nuclear technology will not only help us meet our net-zero carbon targets but will also advance North American energy security."

"Nuclear energy has long been key to Ontario's clean electricity grid, and is a crucial part of our net-zero future," said Ken Hartwick, OPG President and CEO. "Working together, OPG and TVA will find efficiencies and share best practices for the long-term supply of the economical, carbon-free, reliable electricity our jurisdictions need."

OPG and TVA have similar histories and missions. Both are based on public power models that developed from renewable hydroelectric generation before adding nuclear to their generation mixes. Today, nuclear generation accounts for significant portions of their carbon-free energy portfolios.

Both are also actively exploring SMR technologies. OPG is moving forward with plans to deploy an SMR at its Darlington nuclear facility in Clarington, ON. The Darlington site is the only location in Canada licensed for new nuclear with a completed and accepted Environmental Assessment. TVA currently holds the only Nuclear Regulatory Commission Early Site Permit in the U.S. for small modular reactor deployment at its Clinch River site near Oak Ridge, TN.

No exchange of funding is involved. However, the collaboration agreement will help OPG and TVA reduce the financial risk that comes from development of innovative technology, as well as future deployment costs.

"TVA has the most recent experience completing a new nuclear plant in North America at Watts Bar and that knowledge is invaluable to us as we work toward the new facility at Darlington," said Hartwick. "Likewise, because we are a little further along in our construction timing, TVA will gain the advantage of our experience before they start work at Clinch River."

"It's a win-win agreement that benefits all of those served by both OPG and TVA, as well as our nations," said Lyash. "Moving this technology forward is not only a significant step in advancing a clean energy future, but also in creating a North American energy hub."

"With the demand for clean electricity on the rise around the world, Ontario's momentum is growing. The world is watching Ontario as we advance our work to fully unleash our nuclear advantage. I congratulate OPG and TVA – two great industry leaders – for working together to deploy SMRs and showcase and apply Canada's nuclear expertise that will deliver economic, health and environmental benefits for all of us to enjoy," said Todd Smith, Ontario Minister of Energy.

"The changing climate is a global crisis that requires global solutions. The partnership between the Tennessee Valley Authority and Ontario Power Generation to develop and deploy advanced nuclear technology is exactly the kind of innovative collaboration that is needed to quickly bring the next generation of nuclear carbon-free generation to market. I applaud the leadership that both companies are demonstrating to further strengthen our cross-border relationships," said Maria Korsnick, President and CEO, Nuclear Energy Institute.