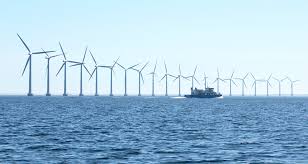 LONDON - Offshore wind power can help reduce greenhouse gas emissions, but it poses risks for the seas. Germany will hold the EU Council Presidency and the North Sea Energy Cooperation Presidency in 2020. What must be done to contain the climate and species crises, as it were?

Offshore wind power is an important regenerative energy source. However, the construction, operation and maintenance of the systems put marine mammals, birds and fish at considerable risk. Photo: Siemens AG

In order to achieve the German and EU climate and energy goals by 2030 and climate neutrality by 2050, we need a nature-friendly energy transition. At present, the European energy system is largely based on fossil fuels. This is changing due to the widespread use of renewable energies for end consumers and industry and the large-scale electrification of the energy consumption sectors. Offshore wind energy is an element for future power generation.

A nature-friendly energy transition is only possible if energy consumption is reduced and energy efficiency is maximized in all applications and sectors. Emissions reductions through offshore wind energy In 2019, Europe had an installed offshore wind energy capacity of around 22 gigawatts from 5,047 grid-connected wind turbines in twelve countries. In Germany, the nominal output of the offshore wind turbines feeding into the German power grid was around 7.5 gigawatts. The wind blows much stronger and more steadily at sea than on land.

The power capacity of the turbines has also almost doubled in the last five years, which has led to a higher energy yield. Offshore wind energy is a building block for replacing fossil fuels. Wind turbines at sea provide electricity almost every hour of the year and have operating hours that are as high as conventional power plants. They can contribute to significant reductions in CO2 emissions and to mitigate the climate crisis.

It must be ensured that offshore wind turbines and parks as well as the grid infrastructure make a positive contribution to climate protection through their expansion and that the overall condition of marine ecosystems improves. The expansion of offshore wind energy is necessary from the point of view of climate science and must take place within the framework of the ecological load limits and under nature conservation aspects.

Seas and marine ecosystems suffer from years of overfishing, pollution and industrial use. The conservation status of sea birds, marine mammals and fish stocks is poor. Ecosystem services and productivity of the oceans are decreasing as a result of massive species extinction and unfavorable habitats. Changes in sea temperature, oxygen levels and acidification of the oceans reduce their resilience to the climate crisis.

With the expansion of offshore wind energy, the pressure on the already polluted marine ecosystems is increasing. Offshore wind turbines also harbor risks for marine ecosystems, especially if they are built in unfavorable locations. Studies show harmful effects on marine mammals, birds, fish and the ocean floor. In Europe, a regulatory framework must be created for the expansion of offshore wind energy within the ecological limits and taking into account zero-use zones. The European Union urgently needs to take coherent measures for healthy and resilient seas.

New strategy of the European Commission The EU Commission plans to present a strategy for the expansion of renewable energies at sea on November 18, 2020.

The strategy will address the opportunities and challenges associated with the expansion of renewable energies at sea, such as effects on energy networks and markets, management of the maritime space, the technological transfer of research projects, regional and international cooperation and industrial policy dimensions . NABU welcomes the strategy, but worries about insufficient consideration of marine protection, ecological load-bearing capacity and the marine spatial planning that regulates interests in the use of the sea. All EU member states have to submit their marine spatial planning plans by March 2021.

Conclusions of the European Council Shortly before the end of 2020, the European Council plans to adopt conclusions for cooperation among European member states on the subject of offshore wind energy and other renewable energy sources at sea. It is important that the planning and development of offshore wind energy is coordinated across national borders, also to protect marine ecosystems.

However, the ecosystem approach must not be left out. It must be ensured that the Council conclusions focus on the implementation of EU marine and nature conservation directives for the expansion of offshore wind energy within the load limits. EU-wide monitoring systems can help protect marine species and ecosystems. Germany holds the EU Council Presidency and the North Sea Energy Cooperation Presidency for 2020 and can make a decisive contribution.

For the nature-friendly expansion of offshore – Wind energy systems must take into account avoidance distances from seabirds to turbines, habitat loss, collision risks and cumulative effects. Implementation / obligation to sensitivity analyzes – they allow targeted conclusions about the best possible locations for offshore wind energy without conflicts with marine protection.

Targeted keeping of areas free for species and their Habitats of anthropogenic use – this increases planning security and can lower investment thresholds for EU funding programs. Ensuring regional cooperation between the European member states for nature Protection and with the involvement of nature conservation authorities – after all, the marine ecosystem does not stop at borders.

Adjustment of priorities: If offshore wind energy is prioritized over other renewable energy sources across Europe, other industrial forms of use of the seas must be given a lower priority.