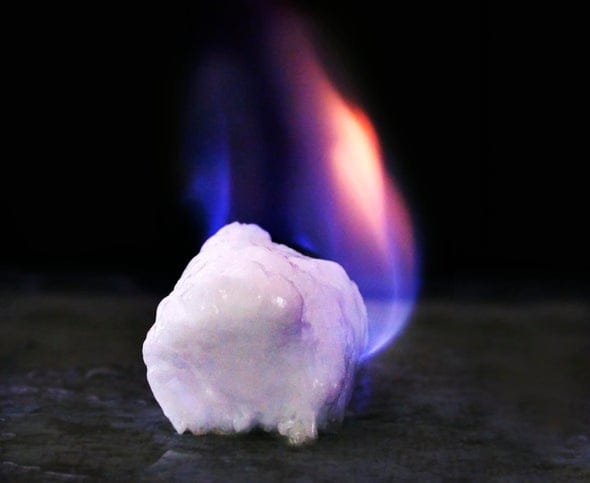 LONDON - The world is quickly realizing it may need to actively pull carbon dioxide out of the atmosphere to stave off the ill effects of climate change. Scientists and engineers have proposed various techniques, but most would be extremely expensive—without generating any revenue. No one wants to foot the bill.

One method explored in the past decade might now be a step closer to becoming practical, as a result of a new computer simulation study. The process would involve pumping airborne CO2 down into methane hydrates—large deposits of icy water and methane right under the seafloor, beneath water 500 to 1,000 feet deep—where the gas would be permanently stored, or sequestered. The incoming CO2 would push out the methane, which would be piped to the surface and burned to generate electricity, to power the sequestration operation or to bring in revenue to pay for it.

Many methane hydrate deposits exist along the Gulf of Mexico shore and other coastlines. Large power plants and industrial facilities that emit CO2 also line the Gulf Coast, so one option would be to capture the gas directly from nearby smokestacks, keeping it out of the atmosphere to begin with. And the plants and industries themselves could provide a ready market for the electricity generated.

A methane hydrate is a deposit of frozen, latticelike water molecules. The loose network has many empty, molecular-size pores, or “cages,” that can trap methane molecules rising through cracks in the rock below. The computer simulation shows that pushing out the methane with CO2 is greatly enhanced if a high concentration of nitrogen is also injected, and that the gas swap is a two-step process. (Nitrogen is readily available anywhere, because it makes up 78 percent of the earth’s atmosphere.) In one step the nitrogen enters the cages; this destabilizes the trapped methane, which escapes the cages. In a separate step, the nitrogen helps CO2 crystallize in the emptied cages. The disturbed system “tries to reach a new equilibrium; the balance goes to more CO2 and less methane,” says Kris Darnell, who led the study, published June 27 in the journal Water Resources Research. Darnell recently joined the petroleum engineering software company Novi Labs as a data scientist, after receiving his Ph.D. in geoscience from the University of Texas, where the study was done.

A group of labs, universities and companies had tested the technique in a limited feasibility trial in 2012 on Alaska’s North Slope, where methane hydrates form in sandstone under deep permafrost. They sent CO2 and nitrogen down a pipe into the hydrate. Some CO2 ended up being stored, and some methane was released up the same pipe. That is as far as the experiment was intended to go. “It’s good that Kris [Darnell] could make headway” from that experience, says Ray Boswell at the U.S. Department of Energy’s National Energy Technology Laboratory, who was one of the Alaska experiment leaders but was not involved in the new study. The new simulation also showed that the swap of CO2 for methane is likely to be much more extensive—and to happen quicker—if CO2 enters at one end of a hydrate deposit and methane is collected at a distant end.

The technique is somewhat similar in concept to one investigated in the early 2010s by Steven Bryant and others at the University of Texas. In addition to numerous methane hydrate deposits, the Gulf Coast has large pools of hot, salty brine in sedimentary rock under the coastline. In this system, pumps would send CO2 down into one end of a deposit, which would force brine into a pipe that is placed at the other end and leads back to the surface. There the hot brine would flow through a heat exchanger, where heat could be extracted and used for industrial processes or to generate electricity. The upwelling brine also contains some methane that could be siphoned off and burned. The CO2 dissolves into the underground brine, becomes dense and sinks further belowground, where it theoretically remains.

Either system faces big practical challenges. One is creating a concentrated flow of CO2; the gas makes up only .04 percent of air, and roughly 10 percent of the smokestack emission from a typical power plant or industrial facility. If an efficient methane hydrate or brine system requires an input that is 90 percent CO2, for example, concentrating the gas will require an enormous amount of energy—making the process very expensive. “But if you only need a 50 percent concentration, that could be more attractive,” says Bryant, who is now a professor of chemical and petroleum engineering at the University of Calgary. “You have to reduce the [CO2] capture cost.”

Another major challenge for the methane hydrate approach is how to collect the freed methane, which could simply seep out of the deposit through numerous cracks and in all directions. “What kind of well [and pipe] structure would you use to grab it?” Bryant asks.

Given these realities, there is little economic incentive today to use methane hydrates for sequestering CO2. But as concentrations rise in the atmosphere and the planet warms further, systems that could capture the gas and also provide energy or revenue to run the process might become more viable than techniques that simply pull CO2 from the air and lock it away, offering nothing in return.