A Snapshot of the US Market for Smart Solar Inverters 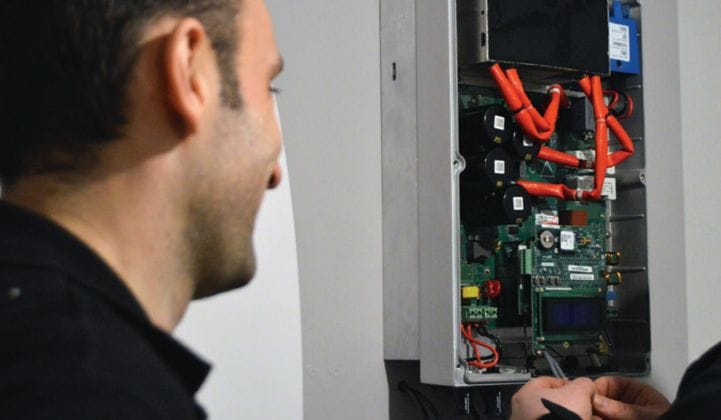 WASHINGTON - Advanced solar inverters could be one of the biggest distributed energy resource communications and control points out there someday. With California now requiring at least early-stage “smart” capabilities from all new solar projects — and a standards road map for next-stage efforts like real-time communications and active controls — this future now has a template.

There are still a lot of unanswered questions about how smart inverters will be used.

That was the consensus at Intersolar this week, where experts discussed the latest developments on the U.S. smart solar inverter front. After years of pilot projects, multi-stakeholder technical working groups, and slow and steady standards development, solar smart inverters are finally starting to hit the market en masse — even if it’s not yet clear just what will be done with them once they’re installed.

“From the technical perspective, the standards are firm,” Roger Salas, distribution engineering manager for Southern California Edison, said. In September of last year, his utility started requiring that all new solar installations come with “Phase 1" advanced inverter functionality, as defined under the state’s Rule 21.

Increasing hosting capacity: A win-win for solar and utilities

Each of these phases aligns with a different value proposition for smart inverters. The first phase is largely preventative, aimed at solving the kinds of problems that have forced costly upgrades to how inverters operate in solar-heavy Germany and Hawaii.

The key standard in question in the U.S. is IEEE 1547, which sets the rules for what grid-connected DERs must do to stay safe, such as trip offline when the grid goes down, or avoid overloading local transformers or circuits.

The old version of the standard, however, had a lot of restrictive rules on tripping off during relatively common voltage excursions, which could cause real problems on circuits with a lot of solar dropping off all at once.

This should increase hosting capacity on circuits that would have otherwise been constrained by these unwelcome behaviors, he said.

The old versions of IEEE 1547 also didn’t provide rules for how inverters could use one of their more flexible capabilities: the ability to inject or absorb reactive power to mitigate voltage fluctuations, including those that may be caused by the PV itself. The new version opens up this capability, which could allow for an active application of reactive power to further increase hosting capacity, as well as solve other grid edge challenges for utilities.

But where utilities see opportunity, the solar industry sees a threat. Every unit of reactive power comes at the cost of a reduction in the real power output of solar inverters — and almost every solar installation out there is paid based on the real power it produces.

“If you’re tasked to do things that rob your energy sales, that will reduce compensation,” noted Ric O'Connell, executive director of the Oakland, Calif.-based GridLab. “And a lot of systems have third-party owners — the Sunruns, the Teslas —  that have contracts, performance guarantees, and they want to get those financed. It’s harder to do that if there’s uncertainty in the future with curtailment."

“That’s the bottleneck right now,” said Daniel Munoz-Alvarez, a GTM Research grid edge analyst. “As we develop markets on the retail end for ...volt/VAR control to be compensated on the grid edge and that is compensated back to the customer, then the customer will be more willing to allow the utility to control their smart inverters or to allow some automation.”

But first, he said, “We need some agreed-upon functions.”

The next stage of smart inverter functionality is establishing communications with the utility. After that, utilities will be able use them to monitor key DER data, or issue disconnect and reconnect commands in emergencies, as well as actively orchestrate other utility devices and systems.

This last area is where Salas sees the greatest opportunity to putting mass-market smart solar inverters to use. “If you want to maximize the DERs and what they can do, the need information from the grid. And DERs provide operational and capability information to the utility.”

Inverter makers have already been forced by California to enable the latest IEEE 1547 capabilities into their existing controls systems — but they are clearly embracing the role that their devices can play on the grid as well. Microinverter maker Enphase leveraged its work in Hawaii into a grid services business, seeking to provide data to utilities where they already had a significant number of installations. While Enphase has since scaled back dramatically, its main rival SolarEdge has taken up the same challenge, launching its own grid services arm earlier this summer.

Inverters have been technically capable of doing most of these things for a long time. But utilities and regulators have been waiting for the completion of IEEE 1547 to move forward decisively. Patrick Dalton, senior engineer for Xcel Energy, said his company’s utilities in Colorado and Minnesota are still several years away from mandating advanced inverter capabilities and are waiting for California’s example in order to choose a path forward.

In the meantime, it’s possible that Xcel's front-of-meter volt/VAR optimization investments in Colorado, including grid edge devices from startup Varentec, could solve many of the issues that have been addressed by smart inverter efforts in Hawaii and California, he noted.

The broader landscape for rolling out smart inverters for solar installations hasn’t changed much, with Hawaii and California still out ahead of the pack. Arizona is the next most important state, with a high penetration of distributed solar, a contentious policy climate surrounding its proper treatment in future years, and a big smart inverter pilot from utility Arizona Public Service to inform stakeholders.

All told, eight separate smart inverter pilots are underway across eight states at present, according to GTM Research: Pacific Gas & Electric and San Diego Gas & Electric in California; APS and Salt River Project in Arizona; Hawaiian Electric in Hawaii; Duke Energy in North Carolina; Con Edison in New York; and a three-state pilot funded by the Department of Energy’s SunShot program and led by the Electric Power Research Institute.