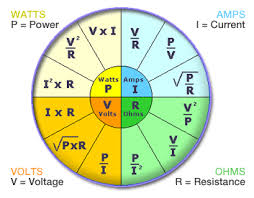 Unit of Electricity used every day

The ampere is the unit of electric current in the SI, used by both scientists and technologists. Since 1948 the ampere has been defined as the constant current which, if maintained in two straight parallel conductors of infinite length of negligible circular cross section and placed one metre apart in a vacuum, would produce between these conductors a force equal to 2 x io7 newton per metre of length. Named for the 19th-century French physicist André-Marie Ampere, it represents a flow of one coulomb of electricity per second. A flow of one ampere is produced in a resistance of one ohm by a potential difference of one volt.

The coulomb is the unit of electric charge in the metre-kilogram—second-ampere system, the basis of the SI system of physical units. The coulomb is defined as the quantity of electricity transported in one second by a current of one ampere. Named for the I8th—I9th-century French physicist.

The faraday (also called the faraday constant) is used in the study of electrochemical reactions and equal to the amount of electric charge that liberates one gram equivalent of any ion from an electrolytic solution. It was named in honour of the 19th-century English scientist Michael Faraday and equals 9.64853399 x 10 to the 4th coulombs, or 6.02214179 x 10 to the 23rd electrons.

The henry is a unit of either self-inductance or mutual inductance, abbreviated h (or hy), and named for the American physicist Joseph Henry One henry is the value of self-inductance in a closed circuit or coil in which one volt is produced by a variation of the inducing current of one ampere per second. One henry is also the value of the mutual inductance of two coils arranged such that an electromotive force of one volt is induced in one if the current in the other is changing at a rate of one ampere per second.

The unit of electrical resistance in the metre—kilogram-second system is the ohm, named in honour of the 19th-century German physicist Georg Simon Ohm. It is equal to the resistance of a circuit in which a potential difference of one volt produces a current of one ampere (1 ohm = 1 V/A); or, the resistance in which one watt of power is dissipated when one ampere flows through it. Ohm's law states that resistance equals the ratio of the potential difference to current, and the ohm, volt, and ampere are the respective fundamental units used universally for expressing quantities. Impedance, the apparent resistance to an alternating current, and reactance, the part of impedance resulting from capacitance or inductance, are circuit characteristics that are measured in ohms. The acoustic ohm and the mechanical ohm are analogous units sometimes used in the study of acoustic and mechanical systems, respectively.

The unit of electrical potential, potential difference and electromotive force in the metre—kilogram—second system (SI) is the volt; it is equal to the difference in potential between two points in a conductor carrying one ampere current when the power dissipated between the points is one watt. An equivalent is the potential difference across a resistance of one ohm when one ampere is flowing through it. The volt is named in honour of the I8th—I9th-century Italian physicist Alessandro Volta. These units are defined in accordance with Ohm's law, that resistance equals the ratio of potential to current, and the respective units of ohm, volt, and ampere are used universally for expressing electrical quantities. Electrical energy power consumption is measured in hours kwh or kilowatt hour kwh.

The watt is the unit of power in the SI equal to one joule of work performed per second, or to 1/746 horsepower. An equivalent is the power dissipated in an electrical conductor carrying one ampere current between points at one volt potential difference. It is named in honour of James Watt, British engineer and inventor. One thousand watts equal one kilowatt. Most electrical devices are rated in watts.

The weber is the unit of magnetic flux in the SI, defined as the amount of flux that, linking an electrical circuit of one turn (one loop of wire), produces in it an electromotive force of one volt as the flux is reduced to zero at a uniform rate in one second. It was named in honour of the 19th-century German physicist Wilhelm Eduard Weber and equals 10 to the 8th maxwells, the unit used in the centimeter-gram—second system.