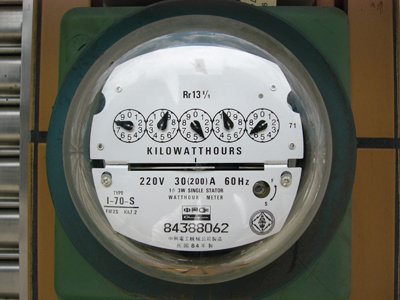 Your electric utility is not too interested in how much power you're consuming for one single ap­pliance, or even how much power a single household is drawing, at any given time. By far the greater concern is the total energy that is used over a day, a week, a month or a year. Electrical energy is measured in watt hours, or, more commonly for utility pur­poses, in kilowatt hours (kWh). The device that measures this consumption is the watthour meter or kilowatt hour meter.

The most often-used means of measuring electrical energy is by using a small elec­tric motor device, whose speed depends on the current, and thereby on the power at a constant voltage. The number of turns of the motor shaft, in a given length of time, is di­rectly" proportional to the number of watthours consumed. The motor is placed at the point where the utility wires enter the house, apartment or building. This is usually at a point where the voltage is 234 V. This is split into some circuits with 234 V, for heavy-duty appliances such as the oven, washer and dryer, and the general household fines for lamps, clock radios and, television sets.

You've surely seen the little disk in the utility meter going around and around, sometimes fast, other times slowly. Its speed depends on the power you're using. The total number of turns of this little disk, every month, determines the size of the bill you will get—as a function also, of course, of the cost per kilowatt hour for electricity.

Kilo-watthour meters count the number of disk turns by means of geared, rotary drums or pointers. The drum type meter gives a direct digital readout. The pointer type has several scales calibrated from 0 to 9 in circles, some going clockwise and others go­ing counterclockwise.

Reading a pointer type utility meter is a little tricky, because you must think in whatever direction (clockwise or counterclockwise) the scale goes. An example of a pointer type utility meter is shown in Fig. 3-11. Read from left to right. For each little meter, take down the number that the pointer has most recently passed. Write down the rest as you go. The meter in the figure reads 3875 kWh. If you want to be really pre­cise, you can say it reads 3875-1/2 kWh.

Fig. 3-11 An example of a utility kilo-watthour meter. The reading is a little more than 3875 kWh.