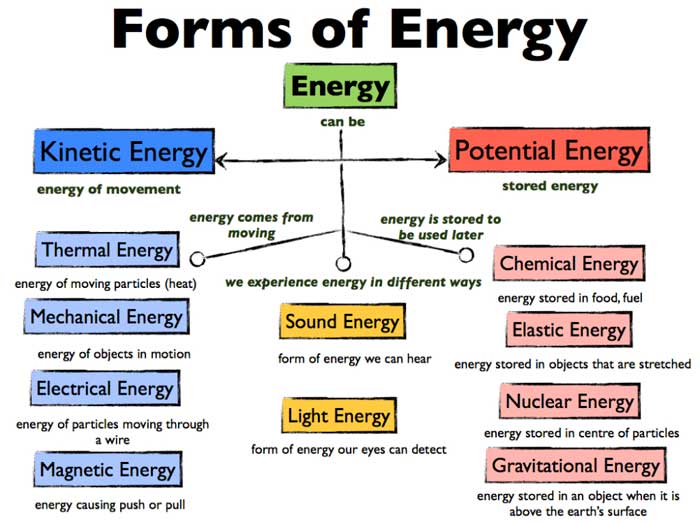 There are numerous forms of energy, but they can all be divided into two basic categories: Potential Energy and Kinetic Energy.

Nuclear energy can be explained as energy which is stored in the nucleus of uranium atoms —which is the energy that binds the nucleus together. Large amounts of nuclear energy is released when the nuclei are combined (the “fusion” of hydrogen atoms, which is what happens in the sun) or split apart (“fission”), as in the case of a nuclear power reactor. In that case, uranium atoms are split, giving off thermal energy. This thermal energy is used to boil water on a large scale, which is then converted into high pressure steam, which in turn spins a turbine/generator to create electricity.

Kinetic energy
Kinetic energy is best described as a form of energy that an object or a particle acquires by reason of its motion. If work, which transfers energy, is performed on an object by applying a net force, the object speeds up and thereby is said to gain “kinetic energy.”

Radiant energy is best described as: “electromagnetic energy that travels in transverse waves.” Examples of radiant energy include: visible light, x-rays, gamma rays, and radio waves. Light itself is one form of radiant energy. Sunlight is radiant energy, which provides both the fuel and warmth which makes life on Earth possible.

Thermal energy is energy contained in an object due to the movement of particles within the object. Think of a microwave oven and how it stimulates atoms, causing them to move. That motion causes the object to heat up. Because thermal energy is due to the movement of particles, it is a form of kinetic energy, which is defined as energy due to motion.

Motion energy is said to be stored in the movement of objects. The faster they move, the more energy is stored. It takes energy to get a rocket launched into space, and the energy is released when the space capsule slows down upon reentry.

Sound energy is defined as the movement of energy through a substance in longitudinal (compression/rarefaction) waves. In other words, sound energy is produced when a force causes an object or substance to vibrate. Think of a tuning fork. When the tuning fork is struck against an object, the energy is transferred through the fork in the form of a wave, and the result is the sound.