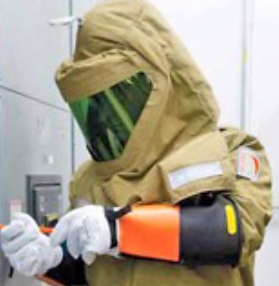 Electrical Arc Flash produces some of the highest temperatures known to occur on earth - up to 35,000 degrees Fahrenheit at the arc terminals. This is four times the surface temperature of the sun.

Working on or around energized electrical power equipment has always been recognized as potentially dangerous. For most of the electric power era, the main risk associated with electricity was electrocution. However, in addition to the shock injuries that result from direct contact of live conductors with the body, another hazard has always been present – the risk of burns due to electric arcs. These arc-flash injuries can occur without any direct contact with energized parts and cause injury or death. While this hazard has existed from the beginnings of the electric power industry, the risk of arc-flash burn injuries has only recently been addressed as a specific hazard in industry safety programs and the relevant safety codes and personal protective equipment ppe.

An electric arc flash occurs as the result of an arcing fault - the flow of electric current through the air from one conductor to another conductor (or to ground). Arcs are generally initiated by a flashover caused by some type of conductor that subsequently vaporizes or falls away, leaving the arc. Arcing faults create many hazards, but the greatest risk to personnel is burn injury due to exposure to the radiant and convective heat generated by the arc. This heat can cause serious, even fatal burns, as well as ignite clothing and other nearby material and objects. In addition, electric arcs can produce molten metal droplets, ultra-violet radiation, superheated metal vapor, shrapnel and air pressure waves that can cause hearing damage and even internal injuries.

An arc is essentially the flow of electrical current through the air, generally hot ionized air or plasma. The various mechanisms by which arcs are created are discussed below. In electrical power systems, this arc must be part of a complete electrical circuit of which the arc is one element. In other words, there must be a complete current path in order to have a sustained arc. The main physical property of arcs that we are concerned with related to arc-flash hazards is the incredible amount of heat that can be generated by the arc.

Arcs can be initiated in a variety of ways. Some of the most common are listed below:

• Dust and impurities: Dust and impurities on insulating surfaces can provide a path for current to potentially track, allowing it to flashover and create arc
discharge across the surface. This can develop into greater arcs. The fumes or vapor of chemicals can reduce the breakdown voltage of air and cause an
arc-flash.

• Corrosion: Corrosion of equipment parts can provide impurities on insulating surfaces. Corrosion also weakens the contact between conductor terminals,
increasing the contact resistance through oxidation or other corrosive contamination. Heat can be generated on the contacts and sparks may be
produced. This can lead to arcing faults with nearby exposed conductors of a different phase or ground.

• Condensation of vapor and dripping water can also cause tracking on the surface of insulating materials. This can create a flashover to ground and
potential escalation to phase-to-phase arcing.

• Overvoltages across narrow air gaps: When the air gap between conductors of different phases is very narrow (due to poor workmanship or damage of the insulating materials), arcs may strike across during overvoltage events.

• Failure of the insulating materials.

The Nature of Electrical Arc Flash

• The intense heat from an arc causes the sudden expansion of air. This can result in a blast with very strong air pressure (lightning is a natural arc).

• All known materials are vaporized at this temperature. When materials vaporize they expand in volume (copper— 67,000 times, water to steam—1,670 times). The air blast can spread molten metal to great distances with force.

• For a low voltage system (600/480), a 3 to 4-inch arc can become “stabilized” and persist for an extended period of time under certain conditions.

• The heat energy released is a function of system voltage, fault current magnitude, and fault duration.

• Arcs in enclosures, such as in a motor control center (MCC) or switchgear, can magnify the blast and energy transmitted as the blast is forced to the open side of the enclosure and towards the worker.