Qualified Electrical Worker - Who is that? 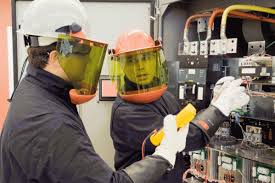 OSHA standards provide a definition of the “qualified person” who works with electrical systems.

Qualified Electrical Worker. How do we determine who that is? Whether you’re a builder, a property owner or the manager of an electrical firm yourself, you’ll need employees who can safely work with electrical systems. How can you be sure you’re only hiring qualified electrical workers for your project?

It’s an important question. Working with electricity can be dangerous, and unqualified workers don’t always have the training they need to stay safe, sometimes with terrible consequences. In 2017, 136 workers lost their lives through exposure to electricity on the job. In fact, workplace electricity exposure has caused more than 130 fatalities every year since 2011 – over 10 deaths per month, for nearly a decade. Many of these accidents could have been prevented with the right training.

Besides, OSHA regulations won’t allow unqualified workers to perform certain types of electrical work. “Only qualified persons may work on electric circuit parts or equipment that have not been deenergized…,” reads OSHA standard 1910.333(c)(2).

The Difference Between Electricians and Electrical Workers

Technically, not every employee who works with electrical systems and equipment will be an electrician. An electrician is a trades professional who comes up through an apprenticeship program, either with an electrician’s union like the International Brotherhood of Electrical Workers (IBEW), a trade association like Associated Builders and Contractors (ABC) or Independent Electrical Contractors (IEC) or an unaffiliated employer.

Electrical workers may be electricians — or they may be electrical technicians, electronics repairers, or any other employee whose day-to-day responsibilities involve electrical systems. This is a catch-all term without a strict definition.

Ultimately, it’s better not to consider an unqualified employee an electrical worker in the first place. Keep expectations clear by using terminology precisely. Of course, to use these terms accurately, we need to understand what professionals mean when they use the term “qualified” in this context.

Qualifications for the Electrician

An electrician learns through an apprenticeship program, which typically lasts four or five years, with at least 2,000 hours of on-the-job-training per year. Supplemental training programs complete the education. Some electricians start at a trade school, though this is far from universal.

Regardless of the source, an electrician’s education will be heavy on safety protocols. Electricians learn to work according to the National Fire Protection Association’s NFPA 70: National Electrical Code. They also study the companion volume, NFPA 70E: Standard for Electrical Safety in the Workplace®, which details the strategies professionals should use to stay safe while working with high-voltage systems.

On completion of the apprenticeship, an electrician will be eligible to take a licensing exam. In the United States, these exams vary by state; learn more about your state’s licensing program at the National Electrical Contractors Association’s website.

An electrician who has completed an apprenticeship and become licensed is called a “journey worker” or “journeyman.” Further experience and study grants the title “master electrician.” Generally speaking, a licensed journey worker will be qualified to install, maintain or repair any electrical system.

Qualifications for the Electrical Worker

OSHA standards provide a definition of the “qualified person” who works with electrical systems. A qualified person, says OSHA standard 1910.399, is “one who has received training in and has demonstrated skills and knowledge in the construction and operation of electric equipment and installations and the hazards involved.”

Notes to this definition clarify that this qualification is highly situation-specific. An employee may be qualified to work with one piece of electrical equipment, but unqualified in relation to the next.

With all of these codes and regulations to consider, prospective employers may feel overwhelmed when faced with hiring decisions. Fortunately, trade associations, labor unions and licensing authorities can inform employers on a candidate’s qualifications. When in doubt, look for licenses and affiliation within professional groups during the search for qualified electrical workers.

Who needs electrical safety training as an Unqualified Electrical Worker?

Employees who are not directly working on electrical circuits but their job task requires that they be around or exposed indirectly to electrical hazards. Examples of job titles for those indirectly exposed to electrical hazards because of job tasks are welders, operators, supervisors, management, millwrights, pipe fitters, carpenters, painters and others associated with construction and maintenance.