Capacitance in Parallel
When capacitors are connected in parallel, the effective plate area increases, and the total capacitance is the sum of the individual capacitances. Figure 1 shows a simplified parallel circuit. The total charging current from the source divides at the junction of the parallel branches. 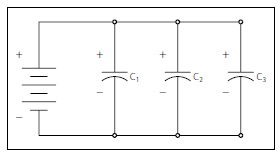 There is a separate charging current through each branch so that a different charge can be stored by each capacitor. Using Kirchhoff’s current law, the sum of all of the charging currents is then equal to the total current. The sum of the charges (Q) on the capacitors is equal to the total charge. The voltages (E) across all of the parallel branches are equal. With all of this in mind, a general equation for capacitors in parallel can be determined as:

Voltages can be factored out because:

Leaving us with the equation for capacitors in parallel:

Capacitance in Alternating Current
If a source of alternating current is substituted for the battery, the capacitor acts quite differently than it does with direct current. When an alternating current is applied in the circuit, the charge on the plates constantly changes. [Figure 2] This means that electricity must flow first from Y clockwise around to X, then from X counterclockwise around to Y, then from Y clockwise around to X, and so on. Although no current flows through the insulator between the plates of the capacitor, it constantly flows in the remainder of the circuit between X and Y. In a circuit in which there is only capacitance, current leads the applied voltage as contrasted with a circuit in which there is inductance, where the current lags the voltage.

To further illustrate this characteristic and how it manifests itself in an AC circuit, consider the following. If a capacitor has a large capacitive value, meaning that it requires a relatively large number of electrons to bring it to a fully charged state, then a rather high frequency current can alternate through the capacitor without the capacitor ever reaching a full charge. In this case, if the frequency is high enough and the capacitance large enough that there is never enough time for the capacitor to ever reach a full charge, it is possible that the capacitor may offer very little or no resistance to the current.

However, the smaller the capacitance, the fewer electrons are required to bring it up to a full charge and it is more likely that the capacitor will build up enough of an opposing charge that it can present a great deal of resistance to the current if not to the point of behaving like an open circuit. In between these two extreme conditions lies a continuum of possibilities of current opposition depending on the combination of alpplied frequency and the selected capacitance.