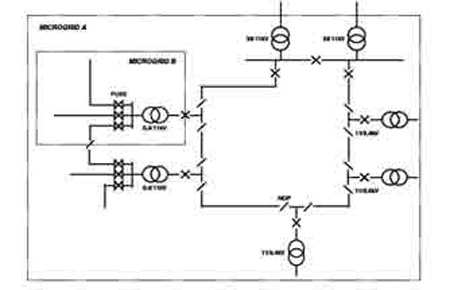 Widespread concerns over the environmental impact of traditional transmission connected thermal generating units are driving the installation of a significant level of generation within distribution networks. The term microgrid refers to the coordinated integration of small-scale distributed or microgeneration within the lower voltage levels of the distribution network, facilitated through the formation of semi-autonomous zones covering a relatively small geographical area.

Such a paradigm shift raises important issues surrounding the operation and protection of a potentially fragmented active network. The need to accommodate significantly varying primary network conditions, minimize customer interruptions, and harness the ancillary benefits of distributed or microgeneration are all fundamental to solving the aforementioned issues. This paper presents the results of research aimed at developing practical protection, control and automation schemes for microgrids. The key issues for protecting low-voltage networks operating with the microgrid paradigm will be given, and will draw strongly on representative examples from distribution systems found within the United Kingdom. Several schemes will be outlined and demonstrated covering both urban and rural applications. The major functional elements of the schemes will be shown in detail, including: the interface, network and microgenerator protection. In addition to illustrating the core protection functionality, attention will be directed towards the benefits obtainable from closely coordinating these functions with that of network automation.

The electricity supply industry is under pressure to move away from relying principally on large transmission connected thermal power stations, and to accommodate smaller, more environmentally sustainable forms of generation connected to distribution networks. This is exemplified in the United Kingdom (UK) by the recent Energy Review.

The drivers for these changes arise from growing concerns surrounding the negative environmental impact of greenhouse gases emitted by the combustion of fossil fuels, and are strongly supported by regulatory incentives within liberalized energy markets. One particular facet of this change in the generation portfolio relates to the changes that may occur at the lowest level of the distribution network, where individual consumers could be incentivised to install microgeneration within residential or commercial premises. The potential capacity available - if fully harnessed - could make a significant contribution towards meeting localized network demand in the future.

However, the ability to facilitate the connection of high levels of generation at low voltages will need careful technical consideration as barriers are thought to exist which may hinder the adoption of these technologies: the potential for voltage rise and the need to install additional protection are often cited as issues [3]. One major avenue of current investigation is to create areas of the network that are identified as microgrids where specific supportive measures have been taken to support the connection of high levels of generation and energy storage.

The term microgrid refers to the coordinated integration of small-scale distributed and microgeneration within the lower levels of the distribution network, facilitated through the formation of semi-autonomous zones covering a relatively small geographical area. In doing so, important issues are raised surrounding the management, operation and protection of a potentially fragmented active network. The provision of an effective, yet affordable protection scheme for microgrid networks represents a challenging objective for research within the field of power system protection. Significantly varying network conditions, a potentially large number of installations, and a relatively low level of engineering capability for those installing and operating equipment are just some of the issues to be addressed.

The results of research aimed at developing practical protection schemes for microgrid networks, and specifically provides:

• A brief overview of the microgrid concept and discussion of key assumptions made about their size and scope.

• The key issues for protecting networks operating with the microgrid paradigm, drawing strongly on representative examples from distribution systems.

• A potential scheme that is functionally outlined and demonstrated conceptually using both rural and urban application examples – the impact of network specific issues such as transitory faults and the radial topology are stressed as applicable.

• In addition to illustrating the core protection functionality, the paper outlines the benefits obtainable from closely coordinating these functions with these of network automation controllers.

Microgrids offer the potential to maximize the level of generation that can be connected at the lower voltage levels of the distribution network and at the same time provide consumers with improved levels of supply security. A microgrid can be temporarily operated in an intentional islanded mode in response to significant disturbances within the upstream grid system (e.g. outage of circuits or power quality disturbances). The adoption of such a strategy effectively creates a cellular structure within the distribution network. This will break down the conventional hierarchical approach to control and raises issues surrounding the operation and management of a potentially fragmented active network.