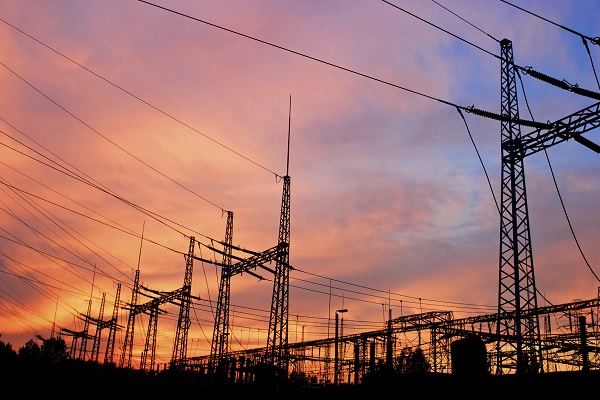 Three-phase electric power systems are used for high and extra-high voltage AC transmission lines (50kV and above). The pylons must therefore be designed to carry three (or multiples of three) conductors. The towers are usually steel lattices or trusses (wooden structures are used in Germany in exceptional cases) and the insulators are generally glass discs assembled in strings whose length is dependent on the line voltage and environmental conditions. One or two earth conductors (alternative term: ground conductors) for lightning protection are often added to the top of each pylon.

Detail of the insulators (the vertical string of discs) and conductor vibration dampers (the weights attached directly to the cables) on a 275,000 volt suspension pylon near Thornbury, South Gloucestershire, England. In some countries, pylons for high and extra-high voltage are usually designed to carry two or more electric circuits. For double circuit lines in Germany, the “Danube” towers or more rarely, the “fir tree” towers, are usually used. If a line is constructed using pylons designed to carry several circuits, it is not necessary to install all the circuits at the time of construction. Medium voltage circuits are often erected on the same pylons as 110 kV lines. Paralleling circuits of 380 kV, 220 kV and 110 kV-lines on the same pylons is common. Sometimes, especially with 110 kV-circuits, a parallel circuit carries traction lines for railway electrification.

High voltage direct current (HVDC) transmission lines are either monopolar or bipolar systems. With bipolar systems a conductor arrangement with one conductor on each side of the pylon is used. For single-pole HVDC transmission with ground return, pylons with only one conductor cable can be used. In many cases, however, the pylons are designed for later conversion to a two-pole system. In these cases, conductor cables are installed on both sides of the pylon for mechanical reasons. Until the second pole is needed, it is either grounded, or joined in parallel with the pole in use. In the latter case, the line from the converter station to the earthing (grounding) electrode is built as underground cable.

Pylons used for single-phase AC railway traction lines are similar in construction to pylons used for 110 kV-three phase lines. Steel tube or concrete poles are also often used for these lines. However, railway traction current systems are two-pole AC systems, so traction lines are designed for two conductors (or multiples of two, usually four, eight, or twelve). As a rule, the pylons of railway traction lines carry two electric circuits, so they have four conductors. These are usually arranged on one level, whereby each circuit occupies one half of the crossarm. For four traction circuits the arrangement of the conductors is in two-levels and for six electric circuits the arrangement of the conductors is in three levels. With limited space conditions, it is possible to arrange the conductors of one traction circuit in two levels. Running a traction power line parallel to high-voltage transmission lines for threephase AC on a separate crossarm of the same pylons is possible. If traction lines are led parallel to 380 kV-lines, the insulation must be designed for 220 kV because, in the event of a fault, dangerous overvoltages to the three-phase alternating current line can occur. Traction lines are usually equipped with one earth conductor. In Austria, on some traction circuits, two earth conductors are used.

Anchor Portal: An anchor portal is a support structure for overhead electrical power transmission lines in the form of a portal for the installation of the lines in a switchyard. Anchor portals are almost always steel-tube or steel-framework constructions.

Termination Pylon: Anchor pylons or strainer pylons utilize horizontal insulators and occur at the endpoints of conductors. Such endpoints are necessary when interfacing with other modes of power transmission (see image) and, due to the inflexibility of the conductors, when significantly altering the direction of the pylon chain. Anchor pylons are also employed at branch points as branch pylons and must occur at a maximum interval of 5 km, due to technical limitations on conductor length. Conductors are connected at such pylons by a short conductor cable “strained” between both ends. They often require anchor cables to compensate for the asymmetric attachment of the conductors. Therefore, anchor pylons tend to be more stably built than a support pylon and are often used, particularly in older construction, when the power line must cross a large gap, such as a railway line, river, or valley. A special kind of an anchor pylon is a termination pylon. It is used for the transition of an overhead powerline to an underground cable. A termination pylon at which the powerline runs further as well as overhead line and as underground cable is a branch pylon for a cable branch. For voltages below 30kV, pylon transformers are also used. Twisted pylons are anchor pylons at which the conductors are “twisted” so that they exchange sides of the pylon. Anchor pylons may also have a circuit breaker attached to their crossbeam. These so called switch pylons are operated from the ground by the use of long sticks. The attachment of circuit breakers to pylons is only practical when voltages are less than 50kV.

Portal Pylon: In electricity distribution, a portal pylon is a type of pylon with which the cross beams on the conductor cables rest on at least two towers. Portal pylons can be made of wood, concrete, steel tubing or steel lattice. They are used in German railroad wiring because of their enormous space requirement as a rule only for anchor pylons, which have to resist high traction power and as bases for lines in switchgears as anchor portals.

Delta Pylon: A delta pylon is a type of support structure for high-voltage electric power transmission lines. The pylon has a V-shapedtop for the admission of the cross beam. Delta pylons are usually established only for one electric circuit, occasionally for two electric circuits. They are used for voltages up to 765 kV. Delta pylons are far more common in the USA, France, Spain, Italy and formerYugoslavia, while in Germany on delta pylons shifted high voltage transmission lines are very rare.

Single-level Pylon: A single-level pylon is an electricity pylon for an arrangement of all conductor cables on a pylon in one level. The singlelevel pylon leads to a low height of the pylons, connected with the requirement for a large right of way. It is nearly always used for overhead lines for high-voltage direct current transmissions and traction current lines. If three-phase current is used, if the height of pylons may not exceed a certain value.

Three-level Pylon: A three-level pylon is a pylon designed to arrange conductor cables on three crossbars in three levels. For two three-phase circuits (6 conductor cables), it is usual to use fir tree pylons and barrel pylons. Three-level pylons are taller than other pylon types, but require only a small right-of-way. They are very popular in a number of countries.

Three-level Pylon: A three-level pylon is a pylon designed to arrange conductor cables on three crossbars in three levels. For two three-phase circuits (6 conductor cables), it is usual to use fir tree pylons and barrel pylons. Three-level pylons are taller than other pylon types, but require only a small right-of-way. They are very popular in a number of countries.

From: Overhead and Underground T&D Handbook, Volume 1, The Electricity Forum