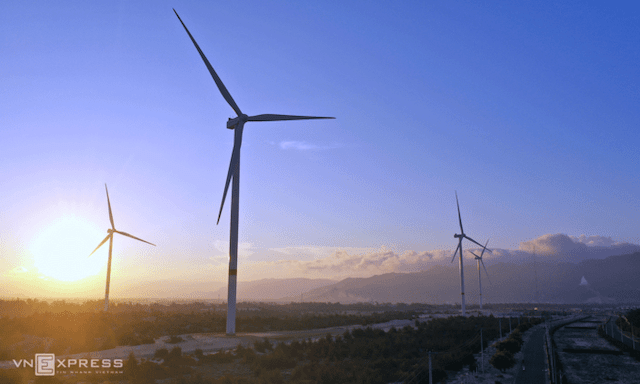 HANOI - U.K. energy firm Enterprize Energy wants to begin operating its $12-billion offshore wind power project in central Vietnam by the end of 2025.
Company chairman Ian Hatton proposed the company’s ThangLong Wind Project in the central province of Binh Thuan be included in Vietnam’s 8th National Power Development Plan, which is being drafted at present, so that at least part of the project can begin operations by the end of 2025 and all of it by 2028.

Renewable energy is a priority in the development plan that the Ministry of Industry and Trade will submit to the government next month. About 37.5 percent of new energy supply in the next decade will come from renewable energy, it envisages.

However, due to concerns of overload to the national grid, Hatton, at a Wednesday meeting with Prime Minister Nguyen Xuan Phuc and U.K. Minister of State for Trade Policy Greg Hands, proposed the government gives Enterprize Energy licenses to develop transmission lines to handle future output.

Developing transmission lines in Vietnam has been the exclusive preserve of the national utility Vietnam Electricity (EVN).

The 3,400-megawatt ThangLong Wind Project is to be located between 20 and 60 kilometers off the coast of Binh Thuan, at a depth of 30-55 meters. Enterprize Energy had said wind resources in this area exceed its expectations.

The project’s construction is expected to stimulate Vietnam’s economic growth with 50 percent of construction and operational expenses made locally.

Vietnam needs $133.3 billion over the next decade for building new power plants and expanding the grid to meet the growing demand for electricity, the ministry has estimated.