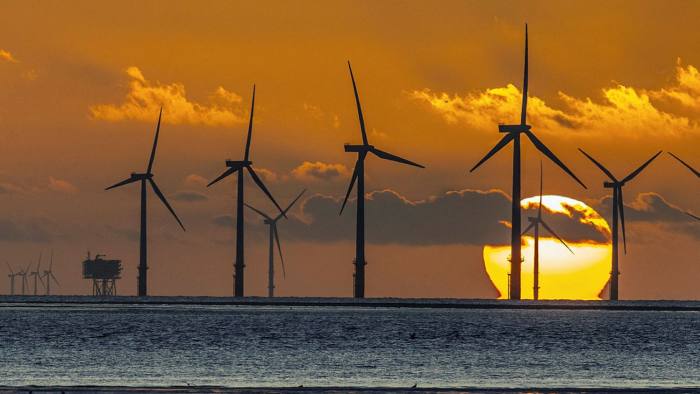 LONDON - Low wind speeds pushed peak hour power prices to the second highest level for at least three years on Monday as Britain’s grid was forced to increase its reliance on gas-fired power plants and draw on coal generation.

Calm weather this year has exacerbated the energy price crisis in the UK, as gas-fired power stations have had to pick up the slack from wind farms. Energy demand has surged as countries open up from pandemic restrictions, which together with lower supplies from Russia to western Europe, has sent wholesale gas prices soaring.

Power prices in the UK for the peak evening period between 5pm and 6pm on Monday surpassed £2,000 per megawatt hour, only the second time they have exceeded that level in recent years.

This was still below the levels reached at the height of the gas price crisis in mid-September, when they hit £2,500/MWh, according to the energy consultancy Cornwall Insight, whose records date back to 2018.

Low wind speeds were the main driver behind Monday’s price spike, although expectations of a pick-up in wind generation on Tuesday should push them back down to similar levels seen in recent weeks, analysts said.

Despite the expansion of renewables, such as wind and solar, over the past decade, gas remains the single biggest source of electricity generation in Britain, typically accounting for nearly 40 per cent of output.

At lunchtime on Monday, gas-fired power plants were producing nearly 55 per cent of electricity, while coal accounted for 3 per cent. Britain’s wind farms were contributing 1.67 gigawatts or just over 4 per cent, according to data from the Drax Electrics Insights website. Over the past 12 months, wind farms have produced 21 per cent of the UK’s electricity on average.

National Grid, which manages the UK’s electricity grid, has been forced on a number of occasions in recent months to ask coal plants to fire up to help offset the loss of wind generation. The government announced in June that it planned to bring forward the closure of the remaining coal stations to the end of September 2024.

Ministers also committed this year to making Britain’s electricity grid “net zero carbon” by 2035, although some analysts have pointed out that would not signal the end of gas generation.

Since the start of the energy crisis in August, 20 energy suppliers have gone bust as they have struggled to secure the electricity and gas needed to supply customers at record wholesale prices, with further failures expected in coming weeks.

Phil Hewitt, director of the consultancy EnAppSys, said Monday’s high prices would further exacerbate pressures on those energy suppliers that do not have adequate hedging strategies. “This winter is a good time to be a generator,” he added.

Energy companies including Orsted of Denmark and SSE of the UK have reported some of the lowest wind speeds for at least two decades this year.

According to weather modelling group Vortex, the strength of the wind blowing across northern Europe has fallen by as much as 15 per cent on average in places this year, which some scientists suggest could be due to climate change.