Elizabeth May wants a fully renewable electricity grid by 2030. Is that possible? 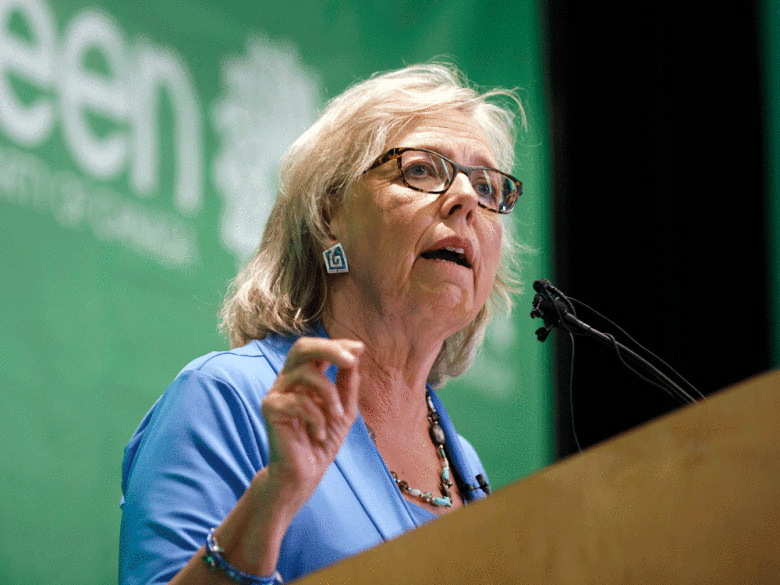 TORONTO - Green Party Leader Elizabeth May has a vision for Canada in 2030. In 11 years, all new cars will be electric. A national ban will prohibit anyone from buying a gas-powered vehicle. No matter where you live, charging stations will make driving long distances easy and affordable. Alberta’s oil industry will be on the way out, replaced by jobs in sectors such as urban farming, renewable energy and retrofitting buildings for energy efficiency. The electric grid will be powered by 100 per cent renewable energy.

It’s all part of the Greens’ “Mission Possible” – a detailed plan released Monday with a level of ambition made clear by its very name. May insists it’s the only way to confront the climate crisis head-on before it’s too late.

“We have to set our targets on what needs to be done. You can’t negotiate with physics,” May told CTV’s Power Play on Monday.

But is that 2030 vision realistic?

CTVNews.ca spoke with experts in economics, political policy, renewable energy and climate science to explore how feasible May’s plan is, how much it would cost and what transitioning to an environmentally-centred economy would look like for everyday Canadians.

MOVING TO A GREEN ECONOMY

Recent polling from Nanos Research shows that the environment and climate change is the top issue among voters this election.

If the Greens win a majority on Oct. 21 – an outcome that May herself acknowledged isn’t likely – it would signal a major restructuring of the Canadian economy.

According to the party’s platform, jobs in the fuels sectors, such as oil and gas production in Alberta, would eventually disappear. The Greens say those job losses would be replaced by opportunities in a variety of fields including renewable energy, farming, public transportation, manufacturing, construction and information technology.

The party would also introduce a guaranteed livable income and greater support for technical and educational training to help workers transition to new jobs.

But Jean-Thomas Bernard, an economist who specializes in energy markets, said plenty of people in today’s energy sector, such as oil and gas workers, wouldn’t have the skills to make that transition.

“Quite a few of these jobs have low technical requirements. Driving a truck is driving a truck. So quite few of these people will not have the capacity to be recycled into well-paid jobs in the renewable sector,” he said.

Ryan Katz-Rosene is an associate professor at the University of Ottawa who researches environmental policy. He says May’s overall pitch is technically possible but would require a huge amount of enthusiasm on behalf of the public.

“But it’s not completely fantastical in it being theoretically impossible.”

Katz-Rosene said that, under the Greens’ plan, Canadians would need to pay for a bold carbon pricing plan that helps shift the country away from fossil fuels. It would also mean dramatically upscaling the capacity of Canada’s existing electrical grid to account for millions of new electric cars.

“Given Canada’s slow attempt to climate action and pretty lacklustre results in these years, to be frank, this plan is very, very difficult to achieve. We’re talking 11 years from now. But things change, people change, and sometimes that change can occur very quickly. Just look at the type of climate mobilization we’re seen among young people in the last year, or the last five years.”

Bernard, the economist, is less optimistic. He cited international agreements such as the Kyoto Protocol from 1997 and the more recent Paris Climate Agreement and said that little has come of those plans.

A climate solution with teeth, he suggests, would need to be global – something that no federal government can completely control.

“I think we are moving toward a mess, but the effort to control that is still not there.”

“Trying to block some oil production here and there means more oil will be produced elsewhere,” he said. “Canada could become a clean country, but worldwide it would not be much.”

Mike Hudema, a climate organizer with Greenpeace Canada, thinks the Green Party’s promises for 2030 are big – and that’s kind of the point.

“They are definitely ambitious, but ambition is exactly what these times call for.  Unfortunately our government has delayed acting on this problem for so long that we have a very short timeline which we have to turn the ship,” he said.

“So this is the type of ambition that the science is calling for. So yes, I believe that if we here in Canada were to put our minds to addressing this problem, then we have the ability to reach it in that 2030 timeframe.”

In a statement to CTVNews.ca, a Green Party spokesperson said the 2030 timeline is intended to meet the 45 per cent reduction in emissions by 2030 as laid out by the Intergovernmental Panel on Climate Change.

“If we miss the 2030 target, we risk triggering runaway global warming,” the spokesperson said.

Greening Canada’s existing electric grid – a goal May has pegged to 2030 – is quite feasible, Katz-Rosene said. Already, 82 per cent of the country’s electric grid is run off of renewable resources, which makes Canada a world leader in the field, he said.

“It is feasible. Canada does have a grid already that has a lot of renewables in it. So yes we can definitely make it over the hump and complete the transition. But we do need investments in our electric grid infrastructure to ensure a certain capability. That comes with tremendous job growth. That’s the exciting part that people keep missing,” Hudema said.

But Bernard said switching the grid to 100 per cent renewables would be quite difficult. He suggested that the Greens’ 2030 vision would require Ontario and Quebec’s hydro production to help power the Prairies.

“To think we could boost (hydro production) much more in order to meet Saskatchewan and Alberta’s needs? Oh boy. To do this before 2030? I think that’s not reasonable, not feasible.”

In a statement to CTV News, the Greens said their strategy includes building new connections between eastern Manitoba and western Ontario to transmit clean energy. They would also upgrade existing connections between New Brunswick and Nova Scotia and between B.C. and Alberta.

A number of “micro-grids” in local communities capable of storing clean energy would help reduce the dependency on nationwide distribution systems, the party said.

Even so, the Greens acknowledged that, by 2030, some towns and cities will still be using some fossil fuels, and that even by 2050 – the goal for achieving overall carbon neutrality – some “legacy users” of fossil fuels will remain.

However, according to party projections, the emissions of these “legacy users” would be at most 8 per cent of today’s levels and those emissions would be “more than completely offset” by re-forestation and new technologies, such as CO2 capture and storage.

The Green Party’s platform promises to revolutionize the Canadian auto sector. By 2030, all new cars made in Canada would be electric and a ban would prohibit the sale of cars powered by gasoline.

Danny Harvey, a geography professor with the University of Toronto who specializes in renewable energy, said he thinks May’s plan for making a 100 per cent renewable-powered electric grid is feasible.

On cars, however, he thinks the emphasis on electric vehicles is “misplaced.”

“At this point in time we should be requiring automobiles to transition, by 2030, to making cars that can go three times further on a litre of gasoline than at present. This would require selling only advanced hybrid-electric vehicles (HEVs), which would run entirely on gasoline (like current HEVs),” he said.

“After that, and when the grid is fully ready, we could make the transition to fully electric or plugin hybrid electric vehicles, possibly using H2 for long-distance driving.”

At the moment, zero-emissions vehicles account for just over 2 per cent of annual vehicle sales in Canada. Katz-Rosene said that “isn’t a whole lot,” but the industry is on an exponential growth curve that doesn’t show any signs of slowing.

The trouble with May’s 2030 goal on electric vehicles, he said, has to do with Canadians’ taste in vehicles. In short: Canadians like trucks.

“The biggest obstacle I see is that I don’t even think it’s possible to get a light-duty truck, a Ford F150, in an electric model in Canada. And that’s the most popular type of vehicle,” he said.

However, if a zero emissions truck were on the market – something that automakers are already working on – then that could potentially shake things up, especially if the government introduces incentives for electric vehicles and higher taxes on gasoline, he said.

WHAT ABOUT THE COST?

CTVNews.ca reached out to the Green Party to ask how it would pay to revamp the electrical grid. The party did not give a precise figure but said that the plan “has been estimated to cost somewhat less” than the Trans Mountain Pipeline expansion.

The Greens have vowed to scrap the expansion and put that money toward the project.

Upgrading the electric grid to 100 per cent sustainable energy would also be a cost-effective, long-term solution, the Greens believe.

“Current projects for renewable energy in Canada and worldwide are consistently at lower capital and operating costs than any type of fossil, hydro or nuclear energy project,” the party spokesperson said.

The party’s platform includes other potential sources of money, including closing tax loopholes for the wealthy, cracking down on offshore tax dodging and a new corporate tax on e-commerce companies, such as Facebook, Amazon and Netflix. The Greens have also vowed to eliminate all fossil fuel subsidies.

As for the economic realities, Katz-Rosene acknowledged that May’s plan may appeal to “radical” voters who view economic growth as anathema to addressing climate change.

But while May’s plan would be disruptive, it isn’t anti-capitalist, he said.

From an economist’s perspective, Bernard said the plan is still “very costly” and that taxes can only go so far.

“In the end, no corporation operates at a loss. At some stage, these taxes have to go to the users,” he said.

But conversations around money must also consider the cost of inaction on climate change, Hudema said.

“Costing (Elizabeth May) is always a concern and how we’re going to afford these things is something we definitely need to keep top of mind. But within that conversation we need to look at what is the cost of not doing what is in line with what the science is saying. I would say that cost is much more substantial.”

“The forecast, if we don’t act – it’s astronomical.”