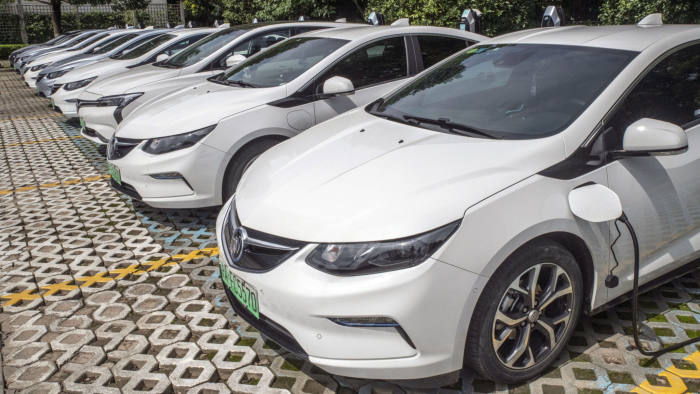 NEW YORK - With electric cars, people often talk about "range anxiety," and how cars with bigger batteries and longer driving ranges will alleviate that. I just drove an electric car from New York City to Atlanta, a distance of about 950 miles, and it taught me something important. The problem really isn't range anxiety. It's anxiety around finding a convenient and working chargers on America's still-challenged charging networks.

Back in 2019, I drove a Tesla Model S Long Range from New York City to Atlanta. It was a mostly uneventful trip, thanks to Tesla's nicely organized and well maintained network of fast chargers that can fill the batteries with an 80% charge in a half hour or less. Since then, I've wanted to try that trip again with an electric car that wasn't a Tesla, one that wouldn't have Tesla's unified charging network to rely on.
I got my chance with a Mercedes-Benz EQS 450+, a car that is as close to a direct competitor to the Tesla Model S as any. And while I made it to Atlanta without major incident, I encountered glitchy chargers, called the charging network's customer service twice, and experienced some serious charging anxiety during a long stretch of the Carolinas.

Long range
The EPA estimated range for the Tesla I drove in 2019 was 370 miles, and Tesla's latest models can go even further.

The EQS 450+ is officially estimated to go 350 miles on a charge, but I beat that handily without even trying. When I got into the car, its internal displays showed a range estimate of 446 miles. On my trip, the car couldn't stretch its legs quite that far, because I was driving almost entirely on highways at fairly high speeds, but by my calculations, I could have gone between 370 and 390 miles on a charge.

I was going to drive over the George Washington Bridge then down through New Jersey, Delaware, Virginia then North Carolina and South Carolina. I figured three charging stops would be needed and, strictly speaking, that was correct. The driving route laid out by the car's navigation system included three charging stops, but the on-board computers tended push things to the limit. At each stop, the battery would be drained to a little over 10% or so. (I learned later this is a setting I could adjust to be more conservative if I'd wanted.)

But I've driven enough electric cars to have some concerns. I use public chargers fairly often, and I know they're imperfect. Sometimes they aren't working as well as they should. Sometimes they're just plain broken. And even if the car's navigation system is telling you that a charger is "available," that can change at any moment. Someone else can pull into the charging spot just a few seconds before you get there.
I've learned to be flexible and not push things to the limit.

On the first day, when I planned to drive from New York to Richmond, Virginia, no charging stop was called for until Spotsylvania, Virginia, a distance of nearly 300 miles. By that point, I had 16% charge left in the car's batteries which, by the car's own calculation, would have taken me another 60 miles.

As I sat and worked inside the Spotsylvania Town Centre mall I realized I'd been dumb. I had already stopped twice, at rest stops in New Jersey and Delaware. The Delaware stop, at the Biden Welcome Center, had EV fast chargers. I could have used one even though the car's navigation didn't suggest it.

Stopping without charging was a lost opportunity and it cost me time. If I'm going to stop to recharge myself why not recharge the car, too?
But that's the thing, though. A car can be designed to go 350 miles or more before needing to park whereas human beings are not. Elementary school math will tell you that at highway speeds, that's nearly six hours of driving all at once. We need bathrooms, beverages, food, and to just get out and move around once in a while. Sure, it's physically possible to sit in a car for longer than that in one go, but most people in need of speed will take an airplane, and a driver of an EQS, with a starting price just north of $100,000, can almost certainly afford the ticket.

I stopped for a charge in Virginia but realized I could have stopped sooner. I encountered a lot of other electric cars on the trip, including this Hyundai Ioniq 5 charging next to the Mercedes.

I vowed not to make that strategic error again. I was going to take back control. On the second day, I decided, I would choose when I needed to stop, and would look for conveniently located fast chargers so both the EQS and I could get refreshed at once. The EQS's navigation screen pinpointed available charging locations and their maximum charging speeds, so, if I saw an available charger, I could poke on the icon with my finger and add it onto my route.

For my first stop after leaving Richmond, I pulled into a rest stop in Hillsborough, North Carolina. It was only about 160 miles south from my hotel and I still had half of a full charge.

I sipped coffee and answered some emails while I waited at a counter. I figured I would take as long as I wanted and leave when I was ready with whatever additional electricity the car had gained in that time. In all, I was there about 45 minutes, but at least 15 minutes of that was used trying to get the charger to work. One of the chargers was simply not working at all, and, at another one, a call to Electrify America customer service -- the EV charging company owned by Volkswagen that, by coincidence, operated all the chargers I used on the trip -- I got a successful charging session going at last. (It was unclear what the issue was.)

That was the last and only time I successfully matched my own need to stop with the car's. I left with my battery 91% charged and 358 miles of range showing on the display. I would only need to stop once more on way to Atlanta and not for a long time.

Charging deserts
Then I began to notice something. As I drove through North Carolina and then South Carolina, the little markers on the map screen indicating available chargers became fewer and fewer. During some fairly long stretches there were none showing at all.

It wasn't an immediate concern, though. The EQS's navigation wasn't calling for me to a charge up again until I'd nearly reached the Georgia border. By that point I would have about 11% of my battery charge remaining. But I was getting nervous. Given how far it was between chargers my whole plan of "recharging the car when I recharge myself" had already fallen apart. I had to leave the highway once to find a gas station to use the restroom and buy an iced tea. A while later, I stopped for lunch, a big plate of "Lexington Style BBQ" with black eyed peas and collard greens in Lexington, North Carolina. None of that involved charging because there no chargers around.

So I got back on the highway and I worried. What if there was something wrong with that charger near the border?

Fortunately, a charger came into sight on my map while I still had 31% charge remaining. I decided I would protect myself by stopping early. After another call to Electrify America customer service, I was able to get a nice, high-powered charging session on the second charger I tried. After about an hour I was off again with a nearly full battery.

I drove the last 150 miles to Atlanta, crossing the state line through gorgeous wetlands and stopping at the Georgia Welcome Center, with hardly a thought about batteries or charging or range.

But I was driving $105,000 Mercedes. What if I'd been driving something that cost less and that, while still going farther than a human would want to drive at a stretch, wouldn't go far enough to make that trip as easily. Obviously, people do it. One thing that surprised me on this trip, compared to the one in 2019, was the variety of fully electric vehicles I saw driving the same highways. There were Chevrolet Bolts, Audi E-Trons, Porsche Taycans, Hyundai Ioniqs, Kia EV6s and at least one other Mercedes EQS.

Americans are taking their electric cars out onto the highways. But it's still not as easy as it ought to be.