What is Surge Suppression? 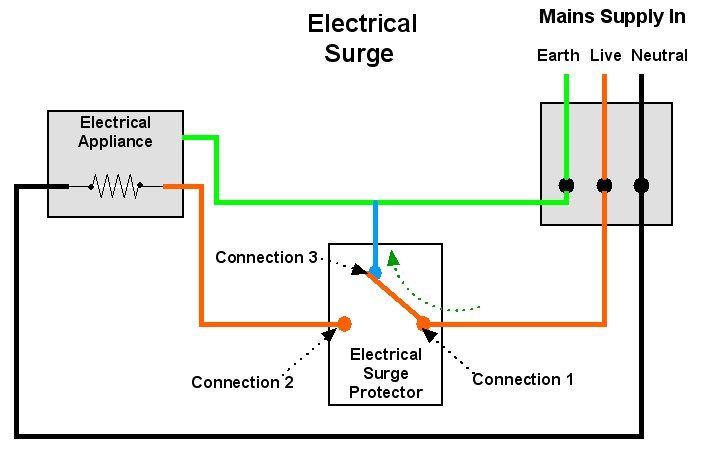 What is Surge Suppression?

A surge suppressor can be the first and best defense against the instant or gradual destruction of electrical equipment. Compared to the replacement cost of a computer or the costly impact of data loss, surge suppressors are very inexpensive. Surge protection is a defense against damage from extremely high voltages that can be caused by lightning strikes, short circuits somewhere on the line, or switching equipment on or off line. Until the introduction of solid state devices, most AC powered equipment was too robust to be upset by surging power.

However, modern electronic equipment such as computers, telecommunications equipment and controllers is vulnerable to surges and the damage they can cause. Many people think of surge damage as caused by a single catastrophic event such as a lightning strike. While lightning is one of the most powerful and destructive surges, it does not occur frequently in our service territory. Small surges can occur several times a day or a hundred times an hour, ranging from several thousand volts to under 100 volts. These repeated smaller surges can eventually degrade electronic equipment. Power surges can also be generated by equipment in your facility such as:

Utility operations such as switching may also cause surges that can be carried along utility lines. When the surge reaches an office, factory, or home, it may still have enough energy to jump across switches, even those that are turned off, and damage equipment. An understanding of surges, noise and the serious problems they cause will help you protect valuable equipment from these invisible, extremely fast, and destructive forces.

Why Do We Need Protection?

Surges also create noise which can upset sensitive electronic equipment as well as alter or completely destroy stored data. Noise interference is actually a series of low level surges, typically between 10 volts to less than a volt.

The most common type of suppressors are diverters. Diverters are connected in parallel between any two conductors. Generally, they are line to line, line to neutral, or neutral to ground. There are two basic forms of diverting devices: clamps and crowbars. Clamps - Voltage-clamping devices simply limit the surge. However, these devices have a changing impedance depending on the current flowing through them or the voltage appearing across them. Metal-oxide varistors (MOV) and avalanche diode suppressors are examples of clamps. Metal-oxide varistors (MOVs) operate in the nanosecond range and were originally designed to protect electric motors. The disadvantage here is a limited pulse life. Each time an MOV suppressor reacts to a surge, its performance ability lessens. Therefore, it is difficult to predict an MOV product’s life.

It depends primarily on the number and frequency of surges it experiences. Ultimately, it will fail. It is important to plan for replacement of the MOV components. Silicon avalanche diodes respond within nano seconds to clamp excessive voltage but have low energy dissipation characteristics. Further, a surge that exceeds an avalanche suppressor’s rating could get through to the equipment or destroy the surge suppressor. These are rarely used due to short life and limited use. Crowbar - When an overvoltage occurs, the crowbar devices change from a highimpedance to a low-impedance state. This low-impedance state then offers a path to ground, shunting unwanted surges away from sensitive circuits.

Gas discharge tubes are one currently available crowbar device. For radio and TV antennas, a spark gap device may be the principal lightning protection. Gas discharge tubes offer a low resistance path for large currents to shunt highcurrent transients to ground and dissipate energy in the form of light and heat.