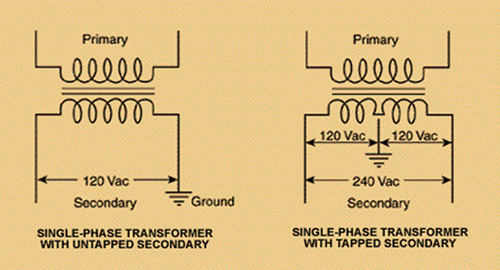 Since transformers are basically AC devices, they do not have a fixed polarity like that of a DC source. They do, however, have relative polarity markings that must be adhered to when connecting them together in different arrangements. Polarity is the instantaneous voltage obtained from the primary winding in relation to the secondary winding.

SIngle phase power transformer leads are generally brought out of the transformer's steel casing through insulating bushings. In all transformers, the H terminals are always the high voltage terminals and the X terminals are always the low voltage terminals. Either can be designated primary or secondary depending on which is the source and which is the load. By convention, terminals Hi and X1 have the same polarity, which means that when H1 is instantaneously positive, X1 is also instantaneously positive. These markings are used in establishing the proper terminal connections when connecting single-phase transformers in parallel, series, or three-phase configurations. An understanding of polarity is essential to correctly construct three-phase transformer banks and to properly parallel single or three-phase transformers with existing electrical systems. 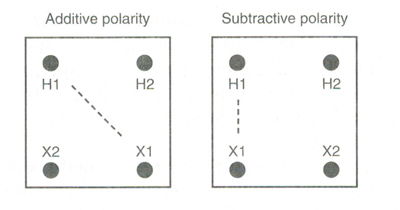 The standard polarity designation for transformers is as follows:

If transformer leads are unmarked, a polarity test can be made to identify and mark the leads. By convention, the top-left terminal when the transformer is looked at from its low voltage side is always labeled H1. 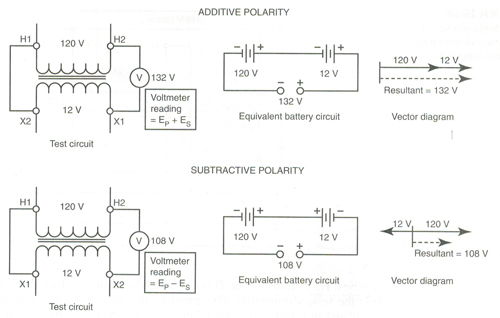 With this in mind, the H1 and H2 leads are labeled. Next, a jumper is connected between the H1 lead and the low-voltage lead adjacent to it, and a voltmeter is connected between H2 and the other low-voltage lead. A low voltage is then applied to the H1 and H2 leads and the voltmeter reading is recorded. If the voltmeter reading is greater than the applied voltage, the transformer is additive and XI will be the lead on the right. If the voltmeter reading is less than the applied voltage, the transformer is subtractive and Xi is on the left (Figure 2). In this polarity test, the jumper wire effectively connects the secondary voltage ES in series with the primary voltage E. Consequently, Es either adds or subtracts from E. From this you can see how the terms "additive" and "subtractive" are derived. 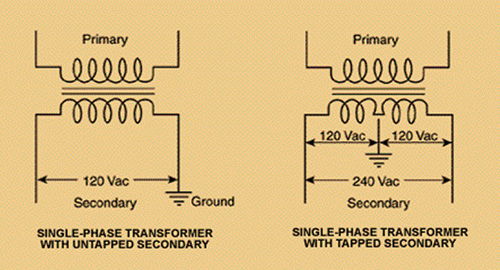 Another form of polarity marking is through the use of dots. Dot notation is used with schematic diagrams to express which terminals are positive at the same instant in time. Figure 3 illustrates how dot notation can be used to identify the Hi and Xi leads.

A transformer wiring diagram can be found printed on the transformer nameplate or inside the cover to the wiring compartment. The leads or terminals are marked with Hs and Xs. In general, connecting individual transformers together requires that: