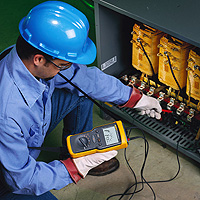 Introduction
An insulation resistance tester can be used to determine the integrity of windings or cables in motors, transformers, switchgear, and electrical installations. The test method is determined by the type of equipment being tested and the reason for testing. For instance, when testing electrical cabling or switchgear (low-capacitance equipment) the time-dependent capacitive leakage and absorption leakage currents become insignificant and decrease to zero almost instantly. A steady conductive leakage current flow is reached almost instantly (a minute or less) providing perfect conditions for the spot-reading/shorttime resistance test using an insulation resistance tester. On the other hand, when the equipment to be tested is a long run of cable, large motor, or generator (high-capacitance equipment) the time-dependent currents will last for hours. These currents will cause the meter readings to change constantly, making it impossible to obtain an accurate steady reading. This condition can be overcome by using a test that establishes a trend between readings, such as the step voltage or dielectric-absorption test. These tests do not depend on a single reading but on a collection of relative readings. It would be a waste of time to perform these tests on low capacitance equipment since the time-dependent currents diminish quickly, resulting in all the measurements being the same.

Installation testing
The most important reason for using an insulation resistance tester is to insure public and personal safety. By performing a high dc voltage test between de-energized current- carrying (hot), grounded, and grounding conductors, you can eliminate the possibility of having a life-threatening short circuit or short to ground. This test is usually performed after the initial installation of the equipment. This process will protect the system against miswired and defective equipment, and it will insure a high quality installation, customer satisfaction, and protect against fire or shock.

Maintenance testing
The second most important reason for using an insulation resistance tester is to protect and prolong the life of electrical systems and motors. Over the years, electrical systems are exposed to environmental factors such as dirt, grease, temperature, stress, and vibration. These conditions can lead to insulation failure, resulting in loss of production or even fires. Periodic maintenance tests can provide valuable information about the state of deterioration and will help in predicting possible failure of the system. Correcting problems will result not only in a trouble-free system, but will also extend the operating life for a variety of equipment.

The value of insulation resistance read on an insulation resistance tester will be a function of following three independent sub-currents. Conductive current is a small (micro-amp) amount of current that normally flows through insulation, between conductors or from a conductor to ground. This current increases as insulation deteriorates and becomes predominant after the absorption current vanishes. Because it is fairly steady and time independent, this is the most important current for measuring insulation resistance. Capacitive charging leakage current When two or more conductors are run together in a raceway, they act as a capacitor. Due to this capacitive effect, a leakage current flows through conductor insulation. This current lastsonly for a few seconds as the dc voltage is applied and drops out after the insulation has been charged to its full test voltage. In low-capacitance equipment, the capacitive current is higher than conductive leakage current, but usually disappears by the time we start recording the data. Because of this, it is important to let the reading “settle out” before recording it. On the other hand, when testing high capacitance equipment the capacitive charging leakage current can last for a very long time before settling out.

Polarization absorption leakage current. Absorption current is caused by the polarization of molecules within dielectric material. In low-capacitance equipment, the current is high for the first few seconds and decreases slowly to nearly zero. When dealing with high capacitance equipment or wet and contaminated insulation, there will be no decrease in the absorption current for a long time.