Any current in excess of the rated current of equipment or the ampacity of a conductor may be considered an overcurrent. Overcurrents can generally be categorized as overloads or faults. An overload is a condition where load equipment draws more current that the system can safely supply. The main hazard with overload conditions is the thermal heating effects of overloaded equipment and conductors. Faults are unintentional connections of the power system which result in overcurrents much larger in magnitude than overloads.

In order to quantitatively characterize a fault, it is necessary to calculate how much fault current could be produced at a given location in the system. In most cases this will be the three-phase short-circuit current, which is the current produced if all three phases were shorted to each other and/or to ground. The simplest method for illustrating this is to reduce the power system at the point in question to its Thevenin equivalent. The Thevenin equivalent is the equivalent single voltage source and impedance that produce the same short-circuit results as the power system itself. The Thevenin equivalent voltage Vth is the open-circuit voltage at the point in question, and the Thevenin equivalent impedance Zth is the impedance of the power system at the point in question with the source voltage equal to zero. If a further simplification is made such that the system can be reduced to its single-phase equivalent, then a simple 3-phase fault current calculation for the three-phase fault current If3ø can be performed as shown in Figure 1: 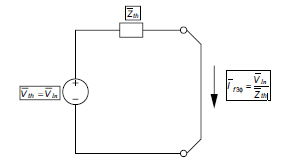 The Thevenin impedance for a power system at a given point in the system is referred to as the short-circuit impedance. In the great majority of power systems the short-circuit impedance is predominately inductive, therefore one simplification that is often made is to treat the impedance purely as inductance. This has the effect of causing the fault current to lag the system line-to-neutral voltage by 90°. If the system is an ungrounded delta system the equivalent line-to-neutral voltage can be obtained by performing a delta-wye conversion of the source voltage.