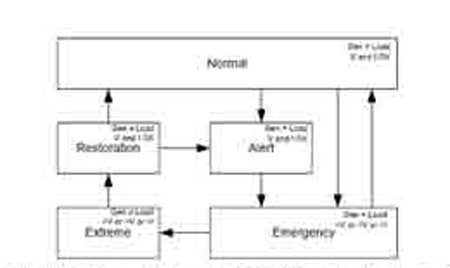 The power system operates in normal state when system frequency and voltages are close to their nominal values and there is sufficient generation and transmission reserve. The system enters an alert state when generation and transmission reserve margins are reduced or eliminated, or there is a problem with one or several of the system components (one or several lines are overloaded). In the alert state, automated and manual controls of the system operate to restore the system to the normal state. Adequate power system monitoring and metering are necessary to promptly detect power system problems and accelerate system recovery.

When the voltage or thermal limits are exceeded or a fault develops, the system enters an emergency state. In the case of a fault, the fault detection, clearance, and system restoration should cause minimum system disturbance. High-speed protective relays and breakers are necessary; speed and proper execution of corrective actions are critical to prevent the system from entering the extreme state. For example, high-speed transmission line protection with single-pole tripping with adaptive reclosing capabilities minimizes system disturbance. When entering the emergency state without a fault in the system, automated control (fast valving, static var compensation, etc.) is desirable to reestablish normal or alert operating state to avoid entering the extreme state.

If the system cannot maintain the generation-load balance, the system enters the extreme state. In the extreme state, load shedding, generation shedding or system islanding occurs to balance generation and load. Underfrequency load shedding schemes operate to restore load-generation balance across the system; undervoltage load shedding schemes operate to avoid system voltage collapse. Remedial action schemes [3] that monitor power flows, system configuration, voltage levels, etc. actuate to separate the system in islands or shed generation to maintain the load generation balance to avoid total system collapse. After load and/or generation shedding, the system enters a system recovery state. In this state, manual or automated reinsertion of generation and load occurs. We can identify tasks that multifunction protective relays can execute to improve system reliability in each of the system operating states.

In the normal and alert states, multifunction relays provide system monitoring. These devices obtain samples of the power system voltages and currents synchronized within 1 ?s. We can use this capability to measure the state of the system in true real time instead of trying to estimate the system state using SCADA and traditional state estimation systems. Additional monitoring capabilities include the following:

In the emergency state, proper execution of corrective actions is key to restoring the system to normal or alert states. Actions that cause minimum system disturbance are required. Multifunction relays are capable of detecting system faults in less than one power system cycle [7] and automatically restoring the system once the fault has been cleared. Because single-line-to-ground faults constitute the majority of all power system faults, single-pole-tripping and reclosing maximizes line power transmission capability by tripping only the faulted phase. Opening and closing of a single phase minimizes the system disturbance. Fast communications minimize fault-clearing times and accelerate control actions.