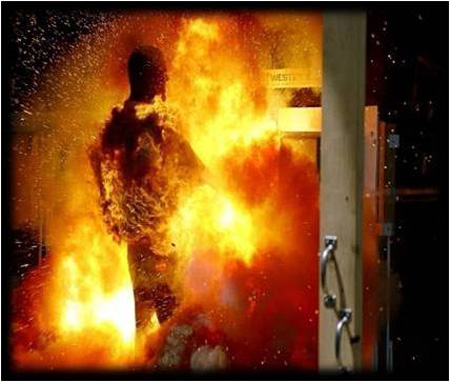 What is an Arc Flash Hazard?

An arc flash hazard as defined by the National Fire Protection Association (NFPA), is "a dangerous condition associated with the release of energy caused by an electric arc.”

The primary hazard created by an arcing fault is the risk of serious burn injuries due to the intense heat created by the arc. Fatal burns can occur when the victim is several feet from the arc. Serious burns are common at a distance of 10 feet.

Staged tests have shown temperatures greater than 437°F on the neck area and hands for a person standing close to an arc-flash.4 Ordinary clothing can be ignited several feet away. Clothed areas on the body can be burned more severely than exposed skin depending on the garment’s fabric.

Additional hazards that can occur include:

• Molten Metal: Arcs can spray droplets of molten metal at high-speed to unprotected parts of the body.

• Shrapnel: Metal shrapnel created by an arcing fault can injure the body.

• Air Pressure: Extreme arc-flash events can create air pressure waves similar to chemical explosions. These have thrown workers across rooms and knocked them off ladders.

• Hearing damage: The sound magnitude has been shown to be more than 140 dB within 2 to 3 meters of an arc.

Why is it hazardous?
Accidents occur when electrical insulation or isolation between conductors is broken or can no longer withstand the applied voltage. An electrical safety accident can result from many different things, even something accidental as inserting a tool in the wrong place or dropping a tool into a circuit breaker or service area. In fact, an it can occur under any of the following conditions: a) if an employee is working on or near energized conductors or circuits, or b) moves near or contact the equipment, or c) a failure of the equipment occurs; any of these conditions may cause a phase-to-ground and/or a phase-to-phase electrical fault.

The thermal temperature of an arc flash explosion can reach more than 5,000 degrees. This energy is in the form of a blinding flash of light and a deafening noise. In this explosion, a giant amount of concentrated energy is forced outward from the electrical equipment toward the electrical worker, spreading hot gases and molten metal.

Every day in the United States, arc flash occurs from five to 10 times. These electrical safety accident events cause arc flash injuries (from the creation of pressure waves that can damage hearing or brain function and a flash that can damage eyesight and burn exposed and covered flesh) which can range from minor burn injuries to life threatening injuries and possible death for electricians who are not wearing personal protective equipment ppe. In addition to the electrical worker being injured, the fast-moving pressure wave, or arc blast can also injure other workers in the vacinity who can be struck by loose material such as pieces of equipment, metal tools, and other projectiles.

In addition to personal injury, an electrical safety accidents can result in serious damage to electrical equipment. which can cause disruption to electrical systems in manufacturing and process industry environments,office buildings, or institutions such as hospitals, airports, schools, etc. The cost from downtime can be considerable.

Where does an Arc Flash Hazard occur?
AF safety accidents typically occur in applications above 120V and can occur when electrical equipment is being serviced or inspected. In fact, some incidents occur when a worker is removing a cover or trim from a piece equipment. Many service companies recommend that electrical equipment be de-energized before any work is commenced, although this is not always possible.

NFPA 70e requires a calculation to determine a hazard assessment and creation of a “protection boundary”. This imaginary boundary, which surrounds the potential Arc Flash Hazard point, specifies what level of personal protective clothing and equipment must be used by qualified workers who enter within that boundary. NFPA 70e defines a “flash protection boundary within which a person could receive a second-degree burn if an electrical arc flash hazrd were to occur". It also defines incident energy as “the amount of energy impressed on a surface, a certain distance from the source, generated during an electrical arc event.”