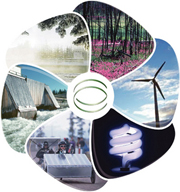 Renewable Energy is electric power that is generated from renewable sources of energy lsuch as: wind power, solar power, geothermal energy, and hydroelectric energy. Renewable energy is easily replenished by nature and is a cleaner, non-carbon polluting source of energy like various fossil fuels. Renewable Energy sources are often referred to as emerging energy technologies.

Renewable energy electricity production is expected to expand significantly over the coming years in the developed world. This represents an opportunity for developed countries (large electricity consumers) to develop and commercialize new and competitive technologies to the traditional "fossil fuel" based technologies and thereby manufacture products and offer services in support of a growing industry.

Renewable energy is power that is generated from natural resources such as sunlight (through photovoltaic solar cells), wind (through wind turbines), water (through dams and hydroelectric power plants), came from renewable energy sources, In 2006, about 18 per cent of the world's electricity consumption came from renewable energy technologies, with 13 per cent coming from traditional biomass, such as wood-burning. Hydroelectricity was the next largest renewable source, providing 3 per cent (15 per cent of global electricity generation, followed by solar hot water/heating, which contributed 1.3 per cent. Modern technologies, such as geothermal energy, wind power, solar power, and ocean energy together provided some 0.8 per cent of total electricity generation.

The term "renewable energy" may not be equal to the term “green” energy. This is because typically the term green energy refers to energy from renewable systems that are smaller than conventional, large-scale electric power generation, including various renewable energy systems. For example, some large-scale hydro-electric projects require large dams and vast reservoirs that flood huge tracks of wilderness. Conversely, low-capacity hydroelectric plants use "low head" water as it turns downstream in order to generate electric power. This results in less impact on the environment.

Although renewable energy is quickly replenished, some of these energies depend greatly on whether the sun is shining or the wind is blowing.

Governments and energy experts are taking a new interest in renewable energy for several reasons. Electric power production from various renewable energy sources produces much fewer global warming, carbon dioxide and other toxic pollutantts, which are having an impact on the world's changing climate. Also, renewable energy usually adds fewer other gaseous pollutants to the atmosphere, including the following:

When the world uses low-impact renewable energy sources, we help to protect the environment. When large-scale non-renewable (fossil fuel) energy projects are developed, they have the potentiality to affect watersheds, migration animal and bird routes, etc.